Those song lyrics were most likely going through the heads of Winter Haven residents and visitors as they witnessed the official lighting of the Christmas tree in the downtown area.

The Winter Haven Christmas Tree Lighting Ceremony on Thursday evening drew in hundreds of guests to Central Park as they watched the town’s Christmas tree light up for the very first time this holiday season.

More than two weeks went into the overall preparation of the decorations, with the decorating starting on Monday and finishing up on Thursday prior to the event, explained Brittany Overstreet, Special Events Coordinator for the City of Winter Haven.

Winter Haven Mayor Pro-Tem Nathaniel J. Birdsong, Jr. officially flipped the switch during the ceremony, turning on the hundreds of lights donning the tree as it overlooks Central Park in Downtown Winter Haven. Helping to ensure that “everything is awesome” were Emmet Brickowski and Wyldstyle, the main characters from “The Lego Movie” and its upcoming sequel, “The Lego Movie 2.”

The two LEGO characters arrived from LEGOLAND Florida for the fourth year to help switch on the lights and later take pictures in front of the tree with children and their families. 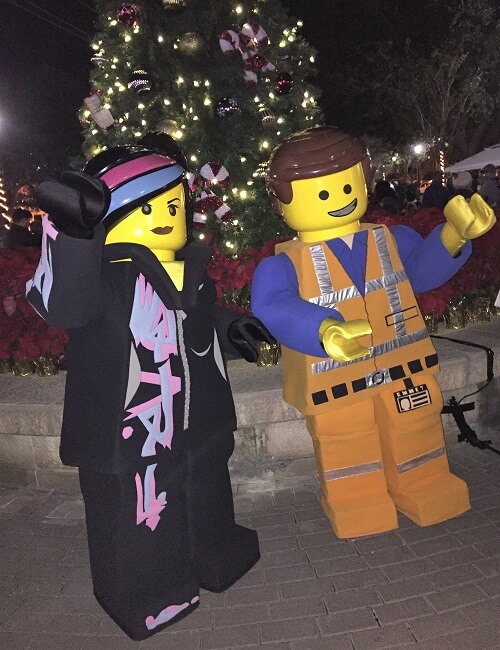 Prior to the tree lighting, the Theater Winter Haven Choir, for the first time at the event, served as Christmas carolers performing traditional Christmas melodies, including a medley of 30 different songs performed in less than three minutes. Earlier, at the very start of the event, children could decorate their own Christmas ornaments and engage in other arts and crafts as provided by the City of Winter Haven. 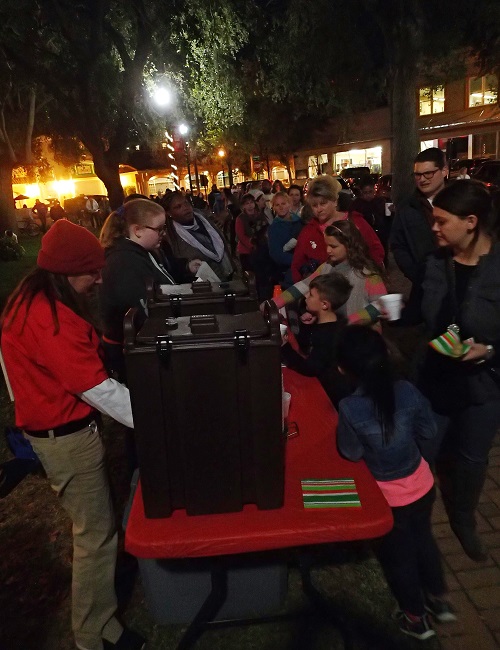 More than 200 guests lined up around the block to receive a free cookie and cup of hot chocolate as provided by local eateries, Gourmet Goodies and Richard’s Fine Coffee respectively.

Overstreet had been supervising the event for the past three years. Each and every year, she has seen it grow in attendance. The first time she attended, she saw more than 90 to 100 guests appear; this year, much more than that were present, she said. Part of what makes their event so successful has been the local residents and their support for local free events and activities such as these, she explained.

“I think [it’s] people being interested in doing things more locally and not traveling so much,” she said. “We like the success of seeing people come out and enjoy it with their families.”

Anita Strang, President of Winter Haven Main Street, loves local events such as this and how they draw in many community members and residents.

So much does she love events such as this that she is more than willing to do anything to attend, even if it means going out in a leg brace like she did this year.

“The tree lighting ceremony is such a beautiful sweet event,” she said. “It was beautiful. I love seeing the children and families.”

Main Street Winter Haven is one of many local organizations that help coordinate with the city to help put on these local events.

From the Christmas ornaments to the cookies and chocolate, most everything provided at the event were donated by local organizations and businesses, and such community involvement has only grown over the years, Overstreet explained.

“We definetly have received more donations from the community,” she said. “We had a couple more community donors than we had in the past.”

One such local donor was Gourmet Goodies, a local bakery that donated the free cookies for the event. The bakery has been participating for the past three years. Not only does the event mean more customers to their store, but overall happier people within the community, explained Carissa Hughes, Owner of Gourmet Goodies.

“That is the most enjoyable thing for us: seeing people come downtown and be supportive of what we do as a community,” she said.