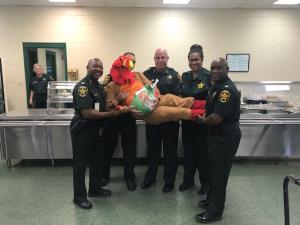 Polk Sheriff’s Charities, a 501 (c) (3) not-for-profit charitable organization, is sponsoring a free turkey giveaway this Saturday, November 17th, at three Polk County locations. With Thanksgiving right around the corner, the Polk Sheriff’s Charities board decided to contribute turkeys to families who may be finding it tough to put a meal together for the holiday.

“This is our way of saying thank you’ to Polk County citizens for their support of our deputies. In some communities around the country, you can find tension and mistrust between law enforcement and residents. Not here. We work hard with our communities to keep our neighborhoods, families, and children safeand we get so much support from so many people. Building relationships and connections in our neighborhoods is what we are all about. We literally could not have the success in fighting crime that we have without our communities’ support. So, we know that there are families out there who are struggling financially and we want to do our small part to help out this Thanksgiving.” -Grady Judd, Sheriff

The turkeys will be distributed one per family, one per vehicle on a first-come, first-served basis while supplies last. No identification or pre-qualification will be required to receive a turkey. “We trust that folks will do the right thing,” Sheriff Judd said. Deputies will be at each location to hand out the birds, which are in the 15 to 17 pound range. Up to 1,300 turkeys will be given away.

“If we have any turkeys left over, Polk Sheriff’s Charities will donate them to the jail to help them serve turkey to the inmates,” said Bunky Hill, Chairman of Polk Sheriff’s Charities. “But I have a feeling we may run out on Saturday. We have a lot of turkeys, but we also have a lot of need in Polk Countynot just folks down on their luck, but we also have working families that could just use a boost for the holiday.”

The locations and times where the turkeys will be distributed are:

Polk Sheriff’s Charities, Inc. was officially formed in December of 2006 and is a 501 (c) (3) not-for-profit charitable organization. Although the idea for the charity had been discussed for some time, it was formed as a result of the tragic murder of Deputy Matt Williams and K-9 DiOGi after a routine traffic stop. The community’s outpouring of emotional and monetary support after that tragic event ultimately demonstrated how a charity like PSCI would be supported.