You might assume a blind woman who stands less than five feet tall would be defenseless against an assailant. You’d assume wrong!

In spite of her size and disability, Eva Trueloc not only knows Tae Kwan Do, she can also wield a firearm proficiently. 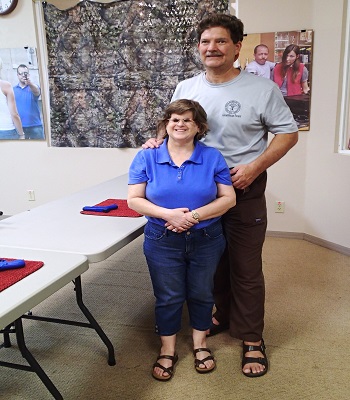 Her husband, Mike, who is also blind, is much taller than her, and yet she was able to toss a man as tall as him across the room.

Whether she chooses to defend herself with her hands or with her guns, one thing is for certain: anyone who dares to underestimate her does so at their own risk. 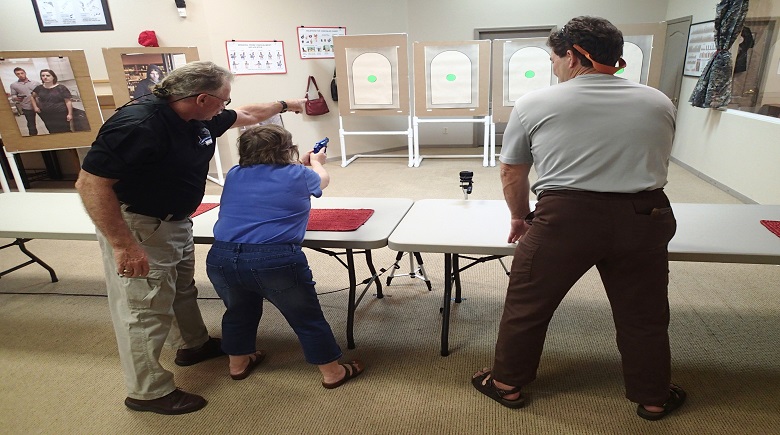 “People assume that because you’re small and blind that you’re helpless, but they are wrong,” she said. “Don’t make assumptions like that because it can get you hurt.”

Both she and her husband received their gun training through the National Rifle Association’s (NRA) adaptive shooting program as provided by In-Gauge of Polk County in Winter Haven.

The program teaches individuals who are handicapped how to wield and use firearms safely.

“The NRA’s goal is to increase access and participation in shooting activities for people with disabilities through specialized techniques and technologies that are safe and unique to each individual,” its website explains.

Mike is legally blind and only able to detect blurry images. His wife, Eva, has light perception, and is unable to see anything.

In spite of their blindness, the couple was able to receive firearms training within the past year.

“If they [assailants] are going to proceed in ignorance that because I’m blind I can’t shoot, then that is their ignorance,” Eva said.

In-Gauge’s gun-training programs and services were showcased to the public during its open house last Saturday. Especially highlighted that day was its state-of-the-art laser program, which allows participants to test their skills using laser guns.

Robert Foss, who oversees In-Gauge, had his expectations exceeded that day with many new visitors to the facility. 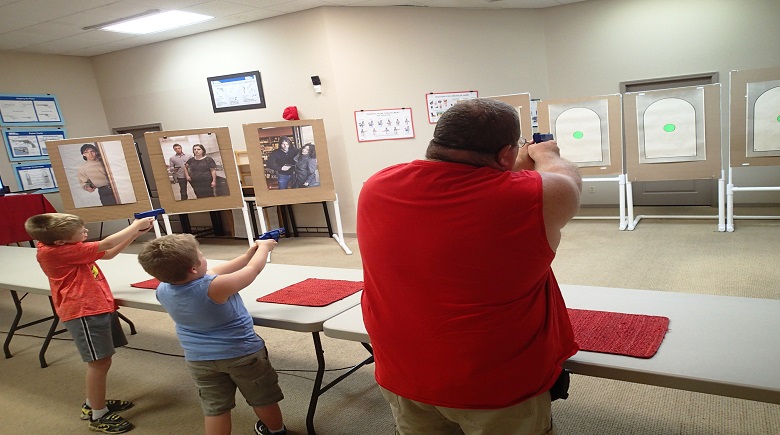 Many children were brought along with their parents, many of whom were interested in firearms safety classes with the intent of ensuring that their children had proper respect for such weapons.

“With the parents bringing their kids in here…they want to get their kids trained in safety,” Foss said.

Both of the Truelocs had prior experiences with firearms, as both of them were raised by parents who owned and used guns. 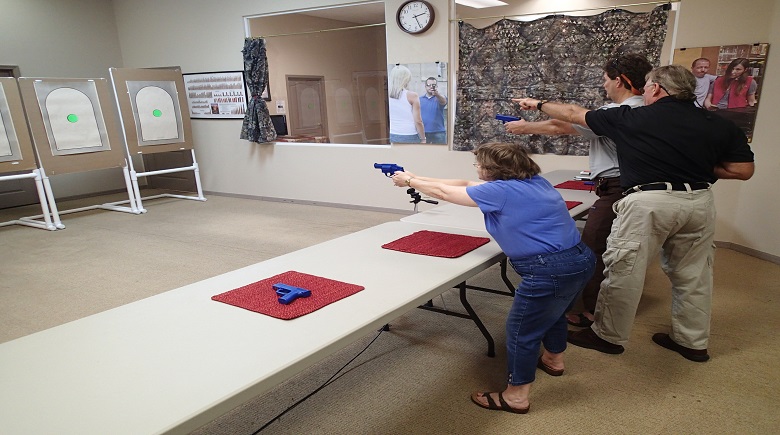 Prior to losing his sight, Mike had learned how to use a gun from both his father and uncle. Meanwhile, Eva’s mother not only knew how to wield a pistol, but even used it to shoot a cat that was bothering their own.

With both of them now as adults who are visually impaired, they considered receiving a refresher course to better acquaint themselves with such weaponry, even in spite of their disabilities.

Without their sight, both of them must rely on their other senses, including hearing, to aim their guns and detect their targets.

Having been blind most of their lives, both of them are already accustom to using sound localization within their daily lives.

This is especially helpful at their own home. If someone arrives at their front door, they always listen carefully to hear who that person could be, Eva explained.

“Before I even think about opening a door, I will be listening to any indication as to who may be outside the door before even opening [it],” she said. “I don’t automatically open the door. If I don’t know who it is, that door is not opening.”

For both of them, the only real challenge that comes with handling their guns while blind is their access to their firearms.

“I would need to know where we keep the gun, where the bullets are, and have it in an easy to get to location, and have it ready to go and be ready to aim when the intruder entered,” Eva said.

Even though both of them had a lifelong familiarity with firearms, both of them were able to gain a deeper knowledge by taking their classes at In-Gauge.

Through their training, they were taught the intricacies of firearms, from the different types of guns and ammo, to how to safely load and unload their weapons.

Once they had gained sufficient proficiency, they were allowed to visit the target range and test out their new skills under the supervision of their instructor.

Foss proved extremely repetitive in his instruction, which all the more allowed them to have the very basics drilled into them, Eva explained.

She recalled many times when she would reach for her gun at the range, and Foss would insist that she put it back down and pick it up the proper way. This helped her better learn the proper technique of handling her firearm.

“For me, it gave me a full appreciation of the use of a gun,” she said. “It was repetitive, but I saw the need for it to be repetitive, because he didn’t want anybody getting carless in their handling.”

Whether you shot a gun before or not, whether you can see or not, the training provided by In-Gauge will allow anyone to gain a better understanding of firearms. 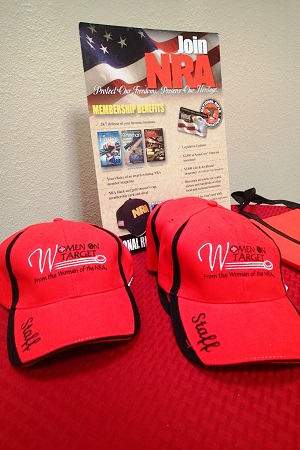 “Anyone who doesn’t know anything about guns at at…it allows them to be more knowledgeable and comfortable about firearms,” Mike said.

For more information about In-Gauge, visit their website at: https://ingaugeofpolkcounty.com/ 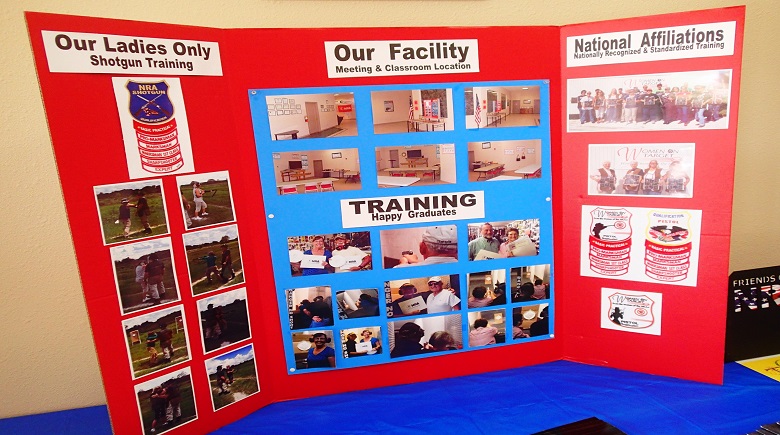 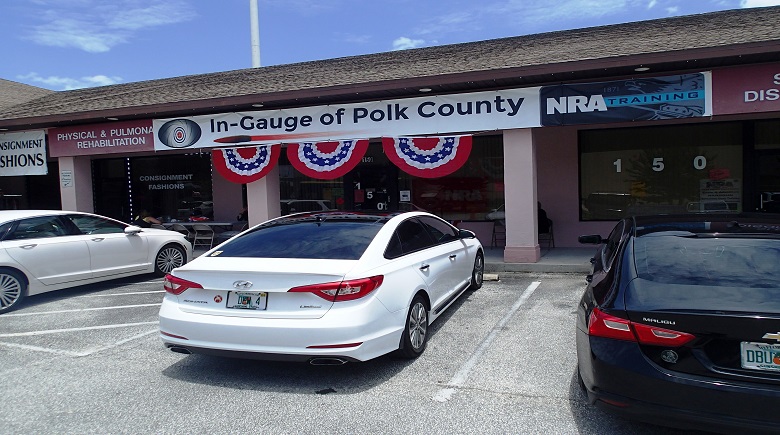