The Polk County Sheriff’s Office is investigating a fatal two-vehicle crash south of Lakeland, that occurred Friday morning, July 6, 2018 at about 10:45 a.m., and may have been the result of road rage.

Killed in the crash was 27-year-old Daniel Bagwell of 2030 Boulevard Street, Bartow. The other driver, 22-year-old Brondon (correct spelling) Manning of 1754 Mehaffey Circle, Lakeland, suffered only a minor injury.

According to the preliminary investigation, both drivers had aggressive interactions with each other as they were driving south on US Hwy 98 South in Highlands City. The two vehicles made contact at the intersection of US Hwy 98 S and Cypress Avenue, and left the west side of the road. Manning, in a black 2007 Acura, spun and struck a vacant business building at 5705 US Hwy 98 South. Bagwell’s silver 2005 Dodge pickup truck struck a vinyl fence in front of the building. A section of the vinyl fence impaled Bagwell’s torso, and he was pronounced deceased at the scene.

Nobody was inside the building at the time the crash occurred, and both drivers were the sole occupants of their vehicles.

At this time, deputies are asking for anyone who may have witnessed the crash or the events that preceded the crash, to call the Polk County Sheriff’s Office at 863-298-6200.

Brondon Manning, one of the two drivers involved in today’s crash has been cooperating with detectives in the investigation. At this time, he has been released with no charges. However, the investigation is ongoing, and detectives request any witnesses to the crash and/or the events leading up to it, to contact the Polk County Sheriff’s Office.

PCSO is on the scene of a traffic crash involving a vehicle that crashed into a house at US Hwy 98 South and Hancock Ave SE in Lakeland. The vehicle occupant is deceased – nobody inside the home is injured.

Preliminary details indicate that this may be the result of a road rage incident.

PCSO is also looking for any witnesses to this crash – a silver Dodge pickup truck and a black Lexus car were both heading south on 98 and the road rage may have starred at Clubhouse Road. 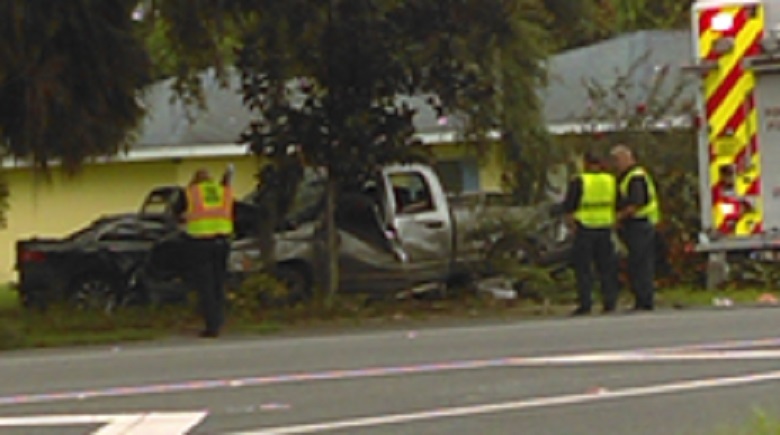