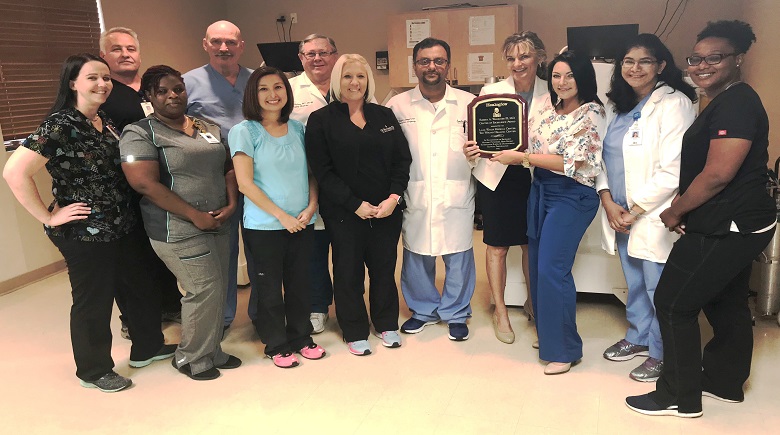 “Our Wound Healing Center has consistently provided excellent patient care since it opened, and as a result, has gotten so busy that we are building an expanded facility for it, scheduled to open late this year,” Brewer said.

The new facility is being built at the corner of Hwy. 60 and 11th Street in Lake Wales. “We are excited to be expanding our Wound Healing Center because we know the positive impact it has on the lives of so many patients each year.”

The Center of Distinction award recognizes outstanding clinical outcomes for twelve consecutive months, including patient satisfaction higher than 92 percent, and a minimum wound healing rate of at least 91 percent within 30 median days to heal.

The Robert A. Warriner III, M.D., Center of Excellence award recognizes the Wound Healing Center meeting benchmarks including patient satisfaction rates higher than 92 percent and a healing rate of at least 91 percent in less than 30 median days, among other quality standards for a minimum of two consecutive years.  The award is named for Dr. Robert A. Warriner III, a pioneer in wound care and the former Chief Medical Officer for Healogics.

The Lake Wales Wound Healing Center offers highly specialized wound care to patients suffering from diabetic ulcers, pressure ulcers, infections and other chronic wounds which have not healed in a reasonable amount of time. Advanced treatments include negative pressure wound therapy, bio-engineered skin substitutes, hyperbaric oxygen therapy, biological and biosynthetic dressings and growth factor therapies. The expanded facility will add a third hyperbaric chamber, with the option of expanding to four when needed.

The center is a member of the Healogics network of nearly 800 Centers.