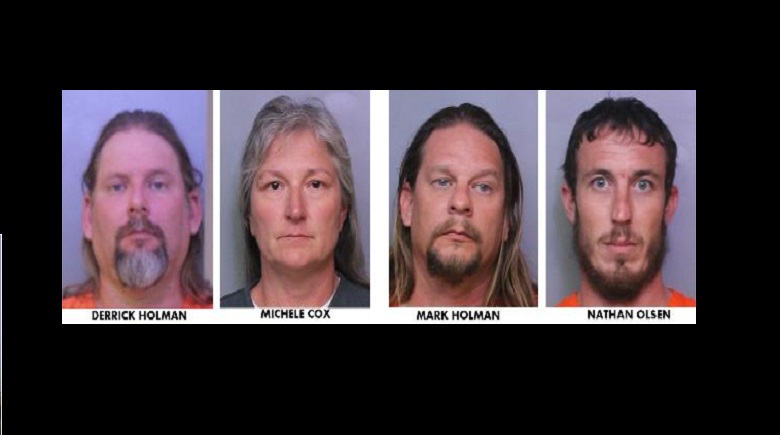 Polk County detectives arrest two wanted fugitives from Indiana on the run since 2003
(Sheriff Grady Judd will be available to comment on this subject at 3:00 p.m. today at the PCSO Sheriff’s Operation Center at 1891 Jim Keene Blvd, Winter Haven)

On Wednesday, April 18, 2018, the Polk County Sheriff’s Office arrested a man and woman who fled from Indiana back in 2003, and assumed new identities, plus two other men who were assisting them.

The two fugitives were 52-year-old Derrick Holman and 48-year-old Michele Cox. In June of 2003, they were arrested In Indiana on drug possession and weapons charges, bonded out, and failed to appear for the charges. The other two arrested were Derrick’s 49-year-old brother Mark Holman, and 32-year-old Nathan Olsen.

Their presence in Florida became known when the real Eric Brewer of Indiana notified his local law enforcement agency that a credit report showed his name was linked to property in Polk County, property which he has never owned.

A Polk County Sheriff’s Office investigation revealed that the four were working together to conceal the real identities of Derrick Holman and Michele Cox.

“The two fugitives from justice assumed new identities here in Florida to avoid capture. In the end, they wound up with a lot of felonies, and a paid one-way ticket back to Indiana.” – Grady Judd, Sheriff