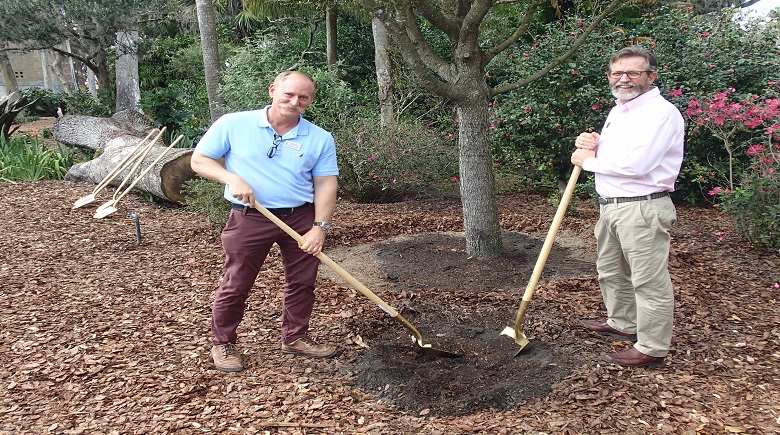 Nearly five months after an old oak tree at Bok Tower Gardens was toppled over by Hurricane Irma, a new tree has been planted in its place.

The new live oak tree was dedicated with the last golden shovelfuls of fresh soil during a tree planting ceremony on Friday afternoon.

A few staff members and volunteers who helped plant the new tree took hold of golden shovels to fill in the hole with the last scoops of fresh soil during the event at 2 p.m.

The ceremony was bookended with a special clarion concert at 3 p.m. with 10 songs about trees and forests, including such classics as “Tie A Yellow Ribbon Round The Old Oak Tree”, “If I Were King of the Forest”, and “Colors of the Wind.” 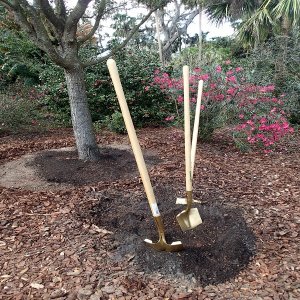 The new tree replaces an old oak tree that had stood near the base of the tower behind the information booth, and which had previously been growing for 100 years before being blown over by the winds of Hurricane Irma back in September. 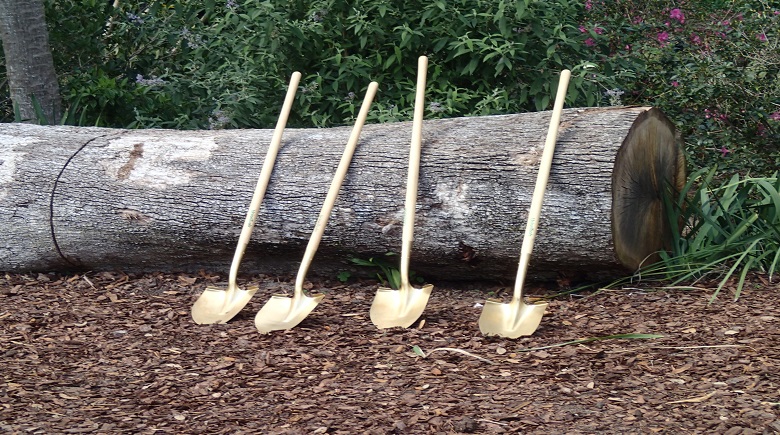 Greg Kramer, Bok Tower Horticultural Director, and his staff had visited several local nurseries and perused several trees before eventually deciding upon the oak selected as the replacement.

“We wanted to stay true to what was here previously to the storm,” he said. “It symbolizes the re-planting of the garden after something so destructive as a hurricane.”

While Hurricane Irma did not hit the gardens quite as hard as Hurricane Charley back in 2004, its 85 m.p.h. winds still left a “leafy mess” in its wake, having toppled over five trees, including the one that has since been replaced, explained David Price, Bok Tower Vice President.

Having formerly been one of the oldest oak trees in the gardens, its log remains set next to the new oak tree, and remains to serve as a reminder to what once had been, as well as add to the overall character of the gardens, he said. 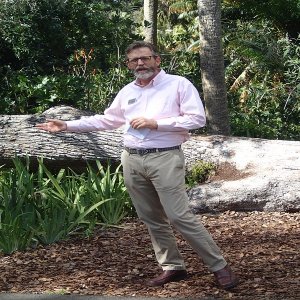 “I think it is a recognition of our triumph over the storm, and resiliency of the gardens,” he said.

While the death of any tree is a significant loss, Price reflects on the overall positives of the after effects, as the dead wood will help return nutrients to the ground, and the new space allows for more sunlight to reach nearby foliage.

“Dead wood is important for the garden,” he said. “As it begins to rot, it will give back to the soil what the tree has taken over these years to grow. With loss also brings opportunity.”

As for the new tree, it will be the first of several new oaks to be planted within the gardens in coming years, as older trees are eventually expected to be replaced due to old age or storm damage, he said.

Aside from dedicating the newly planted tree, the ceremony that day also served as a commemoration of the volunteers and donors whose contributions helped bring the gardens back to their full glory following the hurricane.

“We want to thank the volunteers and staff for the recovery of the gardens, and who worked so hard to clean up and rejuvenate it,” he said. “Some of these folks were here after the hurricane, and they volunteered and worked close to us for 14 days…to get this garden back into shape, and this is the way of us celebrating our victory.”