Warm Up On A Cold Day With Soups On! At Bok Tower

Warm Up On A Cold Day With Soups On! At Bok Tower 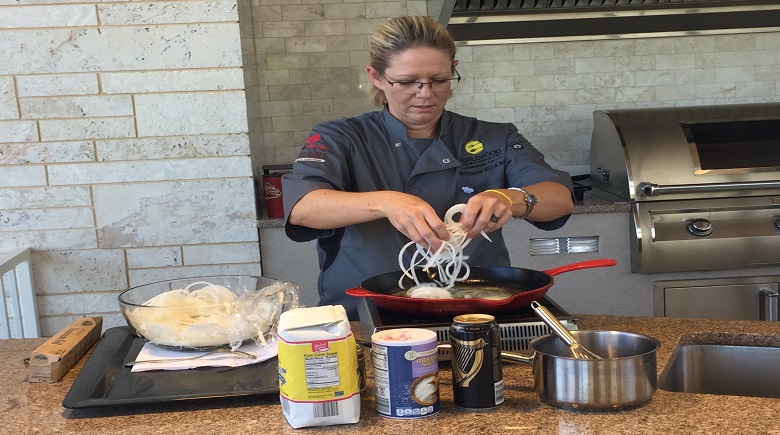 The last few weeks have seen record low temperatures in Florida, and while that may not be ideal weather to go outside, it has been ideal weather to stay inside and warm up with a hot bowl of soup.

Of course, the question remains as to what type of soup is best to warm up with on a cold winter’s day.

Chicken and dumpling stew with shredded pieces of chicken wrapped in floury lumps of dough? Or vegetable soup with bits of pasta and fresh cuts of garden vegetables?

How about something spicy with pork and lentil soup, or even homemade Texas chili made with an extra kick with whiskey barrel stout and cactus petals?

Learn how to make all of these hot soups and more at the upcoming Soups On! cooking demonstration, part of the Farm To Table dinner series at Bok Tower Gardens on Thursday.

This cooking demonstration will be the second installment of Bok Tower’s farm-to-table dinner series, which highlights how to cook homemade recipes using fresh garden ingredients as demonstrated within the scenic outdoor garden and edible kitchen.

Each of the four installments within the series focuses on the four seasons during which the demonstrations taking place, with recipes themed to each respective season.

With this installment taking place within the winter, the selection for this demonstration will be for homemade soups most ideal for warming up on a cold winter’s day.

As this demonstration will take place outside, the fire pit within the outdoor kitchen area will be lit as to provide optimum warmth during the demonstration, provided that the weather is cold enough, of course.

“I hope it is cold, because soup is not good when it’s hot [outside], so I am hoping that it is cold, that the fire pit is lit, and that the people are trying to stay warm and cozy,” said local chef Amy Freeze, who will be hosting the upcoming demonstration.

Freeze gained her love of cooking at a very young age as she learned how to cook at 4-H at the age of eight years old. 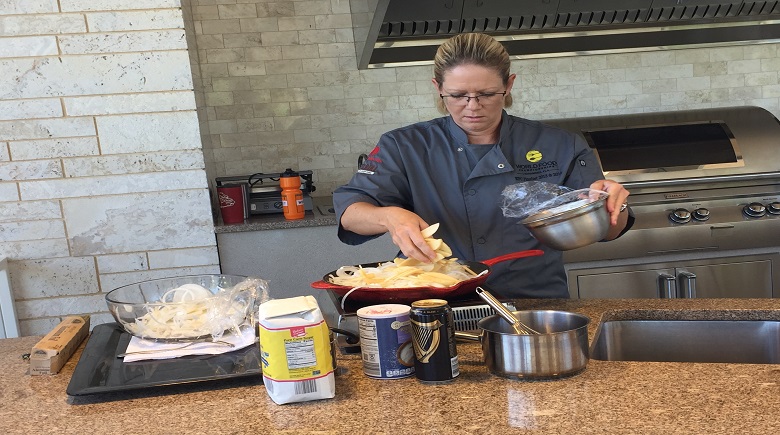 Since then, her cooking has improved to the point where she desired to prove herself in cooking competitions such as the National Pie Championship in 2013, in which she won first place.

She has since been a three-time finalist at the World Food Championship, placing within the top 10 during the past 10 years.

She has learned about the outdoor kitchen at Bok Tower from her stepmother, who is a member, and from a close cooking friend, Emily Ellyn, who had previously hosted her own cooking demonstrations there.

Wanting to provide her own expertise, she offered her services to Bok Tower, who humbly accepted them and allowed her to host a cooking demonstration at last year’s Rootstock in October.

Since then, Freeze has helped coordinate the farm-to-table series, with plans and hopes to offer other cooking demonstrations at future events such as the next Rootstock.

Freeze loves the scenic outdoor setting of the kitchen area and edible garden, as well as the close camaraderie with the overall small space seating up to 60 people, allowing for a more intimate setting that at other larger demonstrations.

“You can talk with [guests], you get to know them, and you hear so many interesting stories,” she said. “Because this is so small, I field a lot of interesting questions with people.”

With the upcoming class, Freeze hopes to not only have optimal soup preparation weather where its cold enough to enjoy soup yet warm enough for people to want to be outside, but to also attract plenty of curious guests willing to try new foods.

“I hope people will venture outside of their comfort zones,” she said. “I just want to show people that dining doesn’t have to be stuffy, that you will can go outside, have an interesting meal, and do something interesting and have fun.”