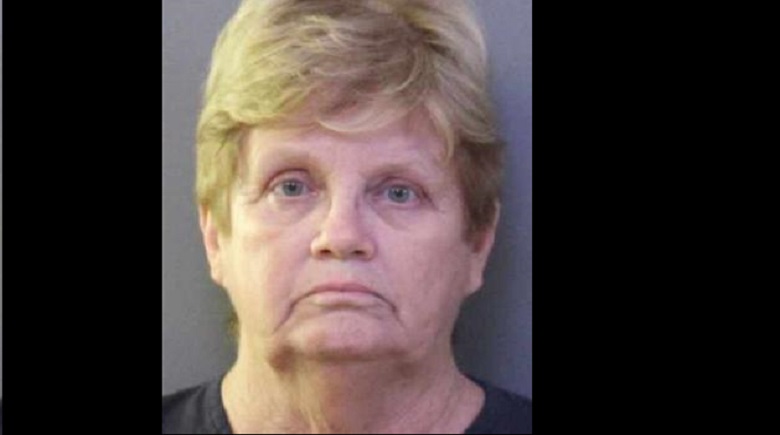 The following is an excerpt from her affidavit, and is self-explanatory:

Deputies met with a Transportation Safety Specialist who stated the transportation office received a citizen complaint on 11-8-2017 at approximately 1623 hours from a witness who reported she saw a bus attendant on bus #1509 strike a female student on the head (this witness was not riding the bus). The witness stated the incident occurred on 11-8-2017 at approximately 1558 hours. Bus #1509 specifically transports special needs children from the Doris Sanders Learning Center in Lakeland to their respective homes throughout Polk County.

Deputies reviewed video footage from bus #1509 from 11-8-2017 between 1558 hours and 1615 hours and observed the bus attendant (later identified as Brenda Nelson, suspect) attempting to help a special needs child in a wheelchair off of the bus. At this same time, the victim is seen sitting in her seat on the bus. During the entirety of the incident as seen in the bus video, the victim is strapped to her seat by a “Houdini Harness” which is designed to significantly restrict her movements and mobility.

At approximately 1558 hours, Brenda is seen on the video walking by the victim and hitting her on the top of her head with an open left hand. Brenda stated, “I’m gonna slap that tongue out of your mouth when I get up there.”

During the time Brenda is shaking the victim’s head, and when Brenda struck her hand, the victim is heard making squealing noises and appears to be experiencing pain. Brenda stated, “Turn around.” to the victim.

Brenda told the bus driver, Bradley Mckean, to take the victim home first instead of following the regular bus route. For the remainder of the bus ride, Brenda sat in the seat with the victim. During that time, it appeared as if Brenda was attempting to push the victim down into the seat to further limit her mobility.

At approximately 1547 hours, deputies conducted a non-custodial, recorded interview with Brenda Nelson. Brenda stated she did not remember hitting the victim on the head yesterday. Brenda stated that while she was trying to get another child off of the school bus, the victim kept beating on the window and trying to get up out of her seat (despite being secured by her harness). Brenda stated the victim misbehaves often and her behavior then upsets all of the other children on the bus. Surrounding the time of both incidents, deputies did not observe the victim beating on the window of the school bus or acting in a disruptive manner as described by the suspect.

Brenda stated, “I guess I done it. I didn’t remember hitting her.” Brenda also stated, “I must have just lost it. I don’t remember doing that. I would never hit one of those kids.”

Based upon the interviews of the persons involved and video footage depicting the incident, deputies determined sufficient probable cause existed that Brenda knowingly, willfully and intentionally struck a child on the head, violently shook her head, and struck her on the hand without causing permanent injury or disability to her. These actions could reasonably be expected to result in physical or mental injury to the victim, due to her epileptic condition and severe mobility restrictions.  Brenda Nelson was serving in a caregiver role as a school board bus attendant at the time of this incident. The suspect’s actions did not appear disciplinary in nature.

Brenda Nelson was arrested and transported to Polk County Jail.

The following is a statement from the Polk County School Board:

“Our children are the single most precious thing on this earth. At Polk County Public Schools, our most important job is to protect them, to provide them with a safe environment in which they can grow, learn and thrive. This employee squandered the trust of the children and families in her care. She does not embody the values of Polk County Public Schools, and I will not tolerate it. I have instructed my HR staff to immediately begin the process of termination.”  Superintendent Jacqueline Byrd