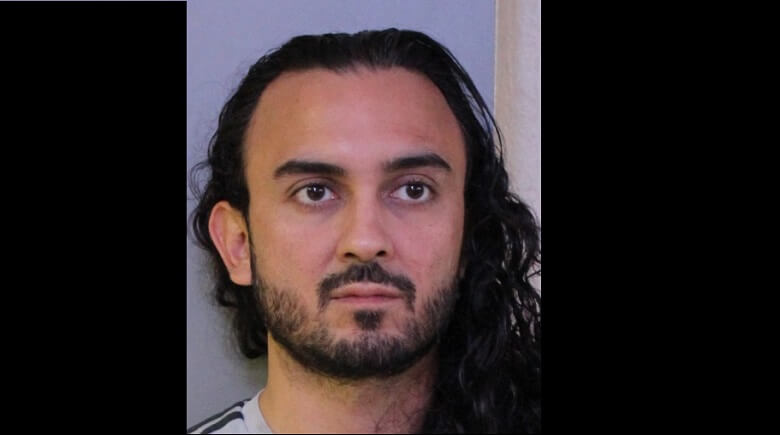 According to an arrest affidavit Paul Martinez, 34 of Lakeland, is accused of slamming his wife’s head, onto the ground several times. The affidavit states the couple has a 4 year old child together.

According to reports the couple went out with a friend on August 20, 2017. After dropping the friend off back at home, somewhere in the area of Eagle Lake (Polk County), they began to argue. During the coarse of the argument both Paul Martinez (suspect) and Libby Martinez (victim) were outside of their vehicle. According to the victim the suspect allegedly “slammed” her head onto the ground several times with his hand until she started “seeing lights”. While doing this the victim stated the suspect was telling her to “die bitch”.

The affidavit goes on to say that they began driving South on Hwy 17 and the suspect allegedly continued his anger towards the victim. The suspect was driving their 2004 Ford Expedition.

In the area of Hwy 17 and Transport Rd (Bartow), their vehicle crossed into the center grass median and rolled over onto it’s side. The victim  alleges this was an intentional act on the suspect’s part, and the suspect alleges the victim grabbed the steering wheel and he over-corrected, which caused the accident.

The victim and suspect received no injuries, and were able to get out of the vehicle.

Once outside the vehicle the suspect allegedly grabbed the victim with his hands and would not let go. At about this time, the two witnesses pulled up on the scene and got out to see if they could assist.

The witnesses reportedly told the suspect to let go of the victim and they put her inside their vehicle and stood in between the suspect and the victim so that suspect could not get to her.

When deputies arrived no signs of injury were observed on the victim or the suspect. The suspect denied the allegations. When deputies interviewed the victim  she appeared scared and intoxicated. The suspect was evaluated for DUI and it was determined he was not. The victim advised she had everything recorded on her cell phone, which was still inside their vehicle.

The victim’s cell phone was recovered from inside the vehicle, and from listening to the recordings, the suspect appeared very angry towards the victim. The suspect allegedly made statements that the victim was going to leave and take all of the weed, but then the suspect stated they would still share it.

According to the affidavit the phone stopped recording prior to the accident. No statement by the suspect was heard regarding him killing the victim.

Based on the victim’s statement, and the statements from the witnesses, Paul Martinez was placed under arrest for Battery (Domestic Violence) and transported him to the Polk County Jail without incident.

The suspect has no prior Battery convictions. The suspect was charged by affidavit with stalking in another domestic dispute in 2009.

On 08/20/17 Department of Children and Families was contacted an a report was filed, in reference to the marijuana statements heard on the audio recording by deputies.

Martinez was released on $2000 bond is currently awaiting his next court date. Martinez is still conducting his duties as a teacher at Lake Gibson Middle School. According to Teresa Griffin, spokesperson with the Polk County School Board, Martinez is continuing his role as a teacher and school officials advise the suspect is “considered innocent until proven guilty”.