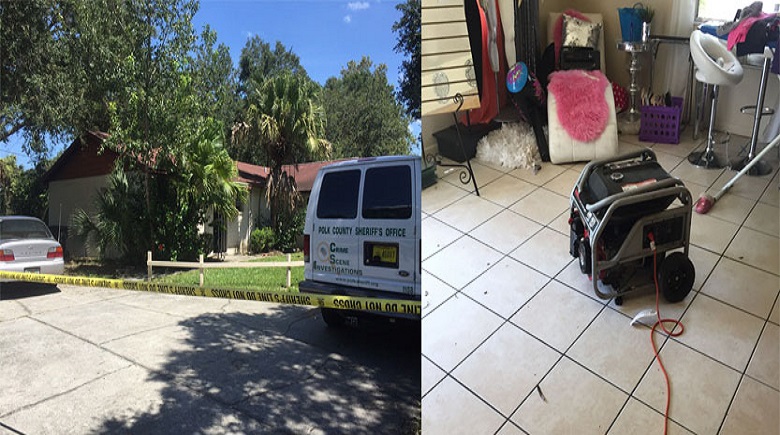 Update to the death investigation of 7-year-old Terryn Wilson of Dossey Road South in Lakeland:

This morning, an autopsy was conducted by Dr. Stephen Nelson, M.E., who concluded that the cause of death is carbon monoxide intoxication, and the manner of death is accidental.

The girl’s mother, Shashunda Wilson, is in a hospital in Miami, being treated for carbon monoxide poisoning. She is in critical, but stable, condition.

She told detectives that she recently obtained a generator due to having lost power during Hurricane Irma, and that this was the first time she had used one, and she was not aware that it could not be in the home.

The Polk County Sheriff’s Office is conducting a death investigation today, September 13, 2017, in the tragic death of a 7-year-old girl who apparently died as a result of carbon monoxide poisoning from a generator being run inside the home, in the aftermath of Hurricane Irma.

“This is the first death our agency has worked related to Hurricane Irma. It’s a tragedy when anyone dies, but when a child dies, it’s a horrific tragedy. Please, please follow safety instructions that we have stressed over and over so no other tragedies such as this one occur.” – Grady Judd, Sheriff

Very preliminary information about this investigation is as follows:

The PCSO Emergency Communications Center (ECC) received a call around 11:45 a.m. this morning from the girl’s mother, 41-year-old Shashunda Wilson, who lives at 5124 Dossey Road South in Lakeland. She said she woke up this morning and was feeling dizzy, and her daughter, Terryn Wilson, who sleeps in the bed with her, appeared to be deceased.

PCFR responded and arrived on-scene, where they found Shashunda sitting outside. They immediately transported her to Lakeland Regional Medical Center for her symptoms of apparent carbon monoxide poisoning. She told them, and they relayed to the deputies who arrived on-scene, that the generator was running in the living room, while she and Terryn were asleep in the bedroom. A fan was blowing on them while they slept.

Due to the high levels of carbon monoxide in the home, PCFR opened all the windows and checked the levels before allowing deputies to respond inside. Once inside, deputies located the victim, deceased in the bed she shared with her mother. The residence is a duplex, and there were very high and dangerous levels of carbon monoxide in the adjoining residence as well. No other victims were affected.

An autopsy will be conducted to determine the victim’s exact cause of death.

As a reminder, the following was sent out by Polk County Fire Rescue:

• Generators and gas grills should be operated in well-ventilated locations, outdoors, away from all doors, windows and vent openings.

• Never use a generator or gas grill in an attached garage, even with the door open.

• Place generators so that exhaust fumes can’t enter the home through windows, doors or other openings in the building.

• Turn off generators and let them cool down before refueling. Never refuel a generator while it is running.

• Store fuel for the generator in a container that is intended for the purpose and is correctly labeled. Store the containers outside of living areas. Propane tanks should also be turned off when not in use and stored outdoors.

• Do not connect a generator to your home’s electrical system without a licensed electrician providing a means to connect. Improper wiring creates the danger of back feeding the power system, energizing downed lines and fatally electrocuting anyone that contacts those lines.

The Department of Health reminds you that you cannot see or smell CO, and portable generators can produce high levels of CO very quickly. If you start to feel sick, dizzy, or weak while using a generator, get to fresh air RIGHT AWAY. DO NOT DELAY.

If you have a poisoning emergency, call your nearest Florida Poison Information Center at 1-800-222-1222. If the victim has collapsed or is not breathing, call 911 immediately.