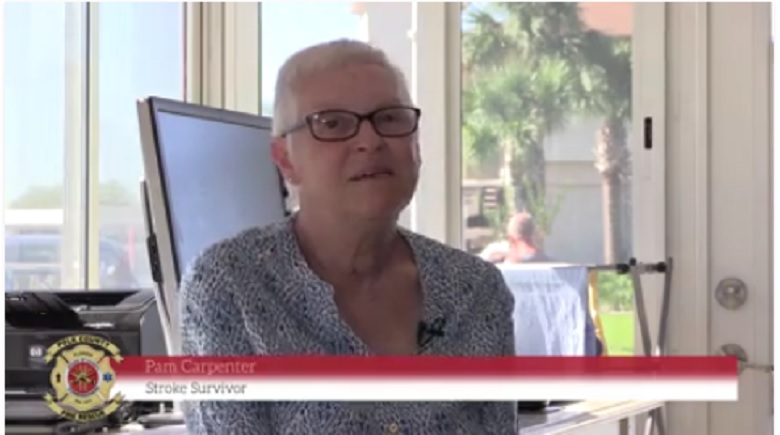 Bartow, Fla. (April 25, 2017) — When David Carpenter woke up on New Year’s Eve, he planned to sit around, watch ball games, drink beer and eat popcorn. But when he saw his wife, Pam, those plans changed dramatically.
“I was having a terrible headache,” Mrs. Carpenter said. Her husband realized it was no ordinary headache, so he called 911 for help. Polk County Fire Rescue crews were dispatched and when they arrived, paramedics determined Pam was having a stroke.
She needed to get to a hospital quickly and was airlifted to Orlando Regional Medical Center. On January 26 she was transferred to Select Specialty Hospital and discharged on February 11.
The Carpenters wanted to thank the Polk County Fire Rescue crew who came to Pam’s aid. In April, they got together for a reunion.
“It’s very rare we get to hear and see what happens after a patient is transferred,” said Captain/Paramedic Blaise Dillman.
The outcome is a positive one. “She’s walking, talking; the odds of that were stacked against her,” Firefighter/Paramedic Amanda Corrente added.
The fire rescue team usually doesn’t have any further contact with the individual after patient care is transferred to the receiving facility.
“This is the career we chose and I feel it’s to make a difference,” Firefighter/EMT Jeff Lee said. “And when we get to get that positive feedback, I feel it’s just a confirmation of the reason why we do the things that we do.”
The Carpenters added they really appreciate everyone who worked to save Pam’s life.
More of Pam’s story can be viewed on the Polk County Fire Rescue Facebook Page.
April 26, 2017