A search warrant of a Winter Haven residence resulted in the arrest of two convicted felons on drug and weapons charges. 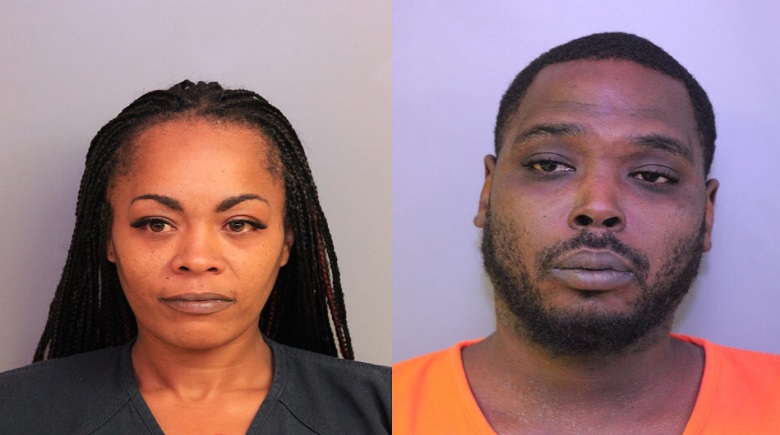 On 9-28-16 at approximately 6 a.m., members of the Winter Haven Police Department served a search warrant on the property of 1205 6th St NW in Winter Haven. The search warrant was obtained after receiving numerous complaints from the community about possible drug activity at the home.
Members gained entry into the home by breaching the door after numerous attempts to have someone open the door. Once the door was open, 34 year-old Dale Lavon Nickerson (DOB 5-30-82, 1205 6th St NE) was standing in the room. He was immediately instructed to get on the floor and he complied. As officers walked through the residence, 33 year-old Marquita Anjanette Battles (DOB 7-19-83, same address) was located lying on the floor. Both Nickerson and Battles were detained in a common area of the residence in order to get identification while other members searched the home.
Inside of the residence, officers located 254.8 grams of cannabis; 191.8 grams of synthetic cannabis; 7.2 grams of crack cocaine; 13.8 grams of powder cocaine; .9 grams of Molly/MDMA; 2.7 grams of alprazolam; 3 arrests; 1 loaded firearm (which was determined to be stolen from a 2016 case in the unincorporated area of Polk County); and $2394.30 cash.
During interviews, Battles initially gave officers her sister’s (Monique Battles) identification information including name and birthdate. A short time later, the sister (Monique) contacted officers and she confirmed that her sister was using her information without her permission because she has a warrant for her arrest. Monique reported to the Winter Haven Police Department to confirm her identity and officers were able to add an additional charge of Criminal Use of Personal Identification, which is a third degree felony.
Both Battles and Nickerson was transported to the Polk County Jail and charged with the following:
Nickerson: Possession With Intent To Sell Cannabis within 1000 of College (F2), Possession of a Firearm by Convicted Felon (F2) and Possession of Paraphernalia (M1).
Battles:  Criminal Use of Personal Identification (F2); Possession With Intent To Sell Cannabis within 1000 of College (F2), Possession of a Firearm by Convicted Felon (F2), Possession of Paraphernalia (M1) and Resisting Arrest W/O Violence (M1).
The criminal histories of Nickerson and Battles are:
Nickerson: (numbers in parenthesis are times arrested for those charges) Resisting officer without violence (3); Burglary (2); criminal mischief; Trespassing;  No valid DL; Grand Theft MV (2); Poss of burglary tools; Possession of cocaine WITS (2); Possession of cannabis (2); Battery (3);  Poss of cocaine (4); Loitering; False info to LEO (5); DWLSR (2); Petit Theft
Battles: No valid DL; Dealing in stolen property; False verification of ownership to pawn; DWLSR; False info to LEO; Resist officer w/out; Fraudulent use of CC; Petit Theft; Forgery; Uttering forged instrument. Battles was also charged on the active warrant from a 2007 case of theft and violation of probation.
(NOTE:  The homeowner, 72 year-old LT Townsend, Sr (DOB 6-15-44, same address) was located outside of the residence sleeping in his vehicle. He told officers that he rented the room out to Nickerson and Battles and knew they were selling narcotics from the residence. Due to his poor health, Townsend was given a Notice To Appear on charges of Keeping Location/Vehicle for Drug Sales (M1).
Townsend also has a criminal history of the following: DWLSR (10); Possession of cannabis (2); Battery; Dealing in stolen property (2); Retail Theft (2); Petit Theft; Trespassing (2); Reckless Driving