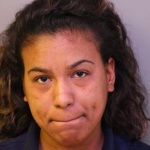 Winter Haven, Florida – On 9/27/2016 Winter Haven Police were contacted regarding a theft of money from the Winter Haven Wal-Mart store at 7450 Cypress Gardens Blvd. According to report officers met with the stores loss control who were looking into a string of cash shortages by an employee Tyra Rivera (DOB: 04/08/98). Rivera a cashier allegedly can be observed on multiple occasions taking money from her drawer and concealing it on her person. According to reports through accounting records of over/short register reports the total amount of the theft was around $2055.

According to reports loss control confronted Rivera who allegedly admitted to taking the money and signed a sworn written statement. The amount listed in the statement is $1,500 admitted to by Rivera. Winter Haven Police Arrested Rivera for Grand Theft and transported her to Polk County Jail.