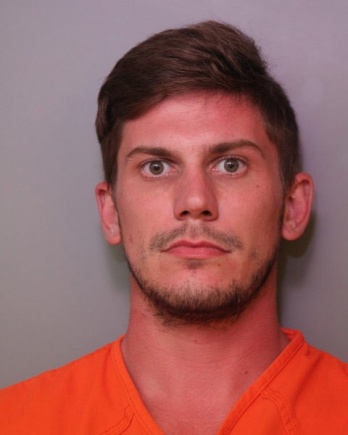 Lakeland, Florida – On 9-17-16, at around 3:43pm, Polk County Sheriff’s Office 911 received a call to report that a subject had just shot at his (the victims) vehicle during an apparent road rage incident, at Hwy 98 South/Hwy 540A, Lakeland. The victim described that he was driving his vehicle northbound, as his wife, was in the front passenger seat. The victim stated that he and his wife were travelling northbound on Hwy 98 South, leaving Bartow city, when he observed a silver hatchback approaching, that was speeding through traffic and began tailgating him, then cut him off. Both vehicles stopped at the traffic light for Ernest Smith Blvd. The victim pulled up beside the silver hatchback and waved his middle finger at the other driver.

The two vehicles continued northbound on Hwy 98 South, and stopped beside each other again, at the traffic light for Hwy 540A. The victim was stopped in the right lane and the suspect vehicle was stopped directly beside him in the center lane. The passenger side window of the hatchback was rolled down. When the victim looked over, he saw that the other driver was pointing a black handgun at him. Then at the same time the light turned green, the suspect fired four to six shots at him. The victim observed the suspect shooting at him and believed he was about to be shot.

The victims then followed the vehicle and provided updates to law enforcement, but lost sight of the vehicle on Hwy 98 South, around Winter Lake Road. The victims could not obtain a tag number, but described the vehicle as having clear taillights and three letters on the lower left corner of the rear windshield.

Shortly after this incident another incident occurred not far away when allegedly the same suspect opened fire with a shotgun at a trailer where his ex-girlfriend lived. According to reports the suspect opened fire multiple times on a the trailer putting multiple holes in it. The trailer was occupied by two female victims and 2 children. Thankfully no one suffered severe injuries. The ex-girlfriend arrived home shortly afterwards and from descriptions of the vehicle from multiple witnesses believed it was her ex-boyfriend Thomas Vice. Another witness not in the residence advised that the person in the vehicle wore a black mask.

Shortly afterwards deputies stopped a vehice in the area of US Hwy 98 and Combee Road which matched the description witnesses provided from the scene of the shooting and the road rage incident. Deputies made contact with the driver and detected an odor of cannabis coming from the vehicle. Deputies searched the vehicle and located a black mask, a Smith and Wesson .357 revolver, and a 12 gage shotgun with three spent shell casings on the floor board.  The suspect stated he did not know anything about the incident and denied all involvement. The suspect stated he drove to the Lakeland Square Mall to buy a few items then drove back home where he was stopped. The suspect stated he had possession of his vehicle all day and no one else had been driving it. The suspect admitted to the cannabis that was found in his vehicle but denied any involvement or knowledge about any of the events that transpired.

The suspect was arrested and transported to the Polk County Jail without incident.