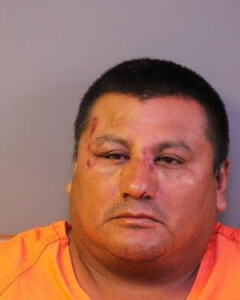 On 8-31-16 at approximately 5:15 a.m., 42 year-old Adrian SanJavier (DOB 5-17-74, Rochelle Dr., Winter Haven) entered the porch of Quinton Jackson (Ave F, SW, Winter Haven) and started taking clothes off of the porch. Jackson, who was getting ready for work, heard his dog barking frantically, which was out of the ordinary.

Due to his injuries, SanJavier was taken to Winter Haven Hospital where he was treated and then booked into the Polk County Jail. Jackson did not need medical attention.
SanJavier was charged with Burglary to an Occupied Dwelling (F2) and Petit Theft (M1).