Winter Haven Police are warning citizens to be extra diligent if approached by someone offering to repair vehicle damage – especially when your vehicle has no damage. 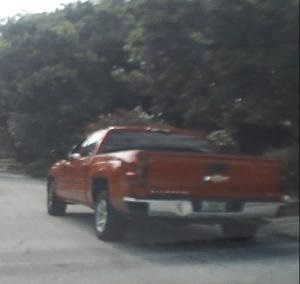 On 7-28-16, Winter Haven Police received two separate calls from citizens who encountered a Hispanic male driving a red newer model Chevrolet Silverado quad cab pickup truck.
The first incident occurred in the North Lake Mirror Dr. area where the male approached the victim at the residence. The male walked up to the door and solicited work to repair the damaged vehicle. The citizen, knowing there was no damage to their vehicle, requested a business card. The male went back to his truck and sped away.

Citizens should be mindful of anyone approaching them offering to do repairs, whether to a vehicle or on their property. Unsolicited repair work can be risky and there could be other motives behind the approach. Always report suspicious incidents such as this as soon as possible in order for law enforcement to attempt to make contact with the person.

The subject in the two recent occurrences is a Hispanic male wearing a white t-shirt and a red ball cap. He has an unidentified script tattoo on his left forearm. The red Chevy Silverado quad cab pickup truck may have a green gas cap cover.

Anyone who has had any suspicious encounter with this individual or has information on his identity is asked to contact Detective Mike Leonard at 863-401-2256.