Five people are behind bars after a search warrant revealed weapons and suspected drug sales from a Winter Haven residence. 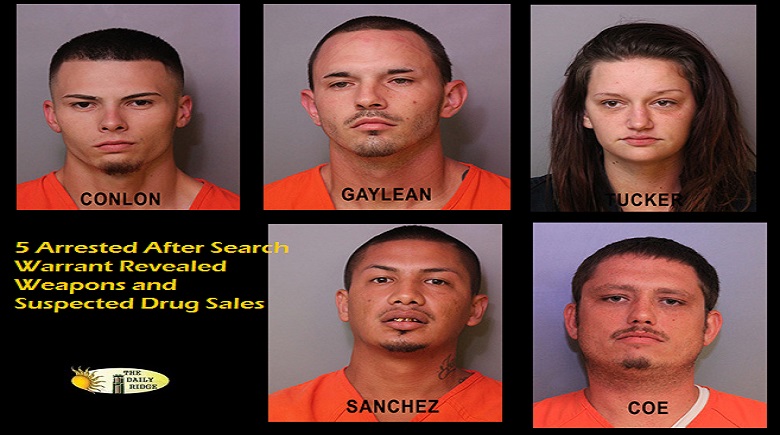 On 7-26-16 at approximately 2 p.m., members of the Winter Haven Police Department executed a search warrant at 309 1/2 Lake Howard Dr. NW in Winter Haven. Officers had obtained the warrant based on information received about known drug activity in the area.
Upon entry into the residence, 23 year-old John Coy Galyean (DOB 3-10-93, 309 1/2 Lake Howard Dr., Winter Haven), 21 year-old Diamond Mary Decepsion Tucker (DOB 1-4-95, 309 1/2 Lake Howard Dr., Winter Haven) and  21 year-old Zachary Raymond Conlon (DOB 1-10-95, 405 Oak St., Auburndale) were found inside the residence in a bedroom. The three were taken into custody without incident.
Upon searching the residence, officers found methamphetamine (street value $3,520), cannabis, opiate patches and Xanex pills (total street value $1,807), drug paraphernalia and two loaded firearms (.45 caliber and .32 caliber).
As officers were on the property conducting additional follow-up, 27 year-old Rockey Sanchez (DOB 4-25-89, 102 High St., Winter Haven) and 29 year-old Kyle Brandon Coe (DOB 2-1-87, 185 Lake Morton Dr., Lakeland) drove onto the property at separate times. When officers made contact with each one, Sanchez was found to have a suspended driver’s license – one suspension on 9-3-13 and the most recent suspension on 9-2-15. He was just released from jail on 7-16-16 on another driving charge. Coe was arrested when officers smelled marijuana inside of his vehicle and it was found that he had a baggie in his shirt pocket.
(You will see in the attached files regarding criminal histories on Galyean, Conlon, Coe and Sanchez. There was no history found on Tucker.)