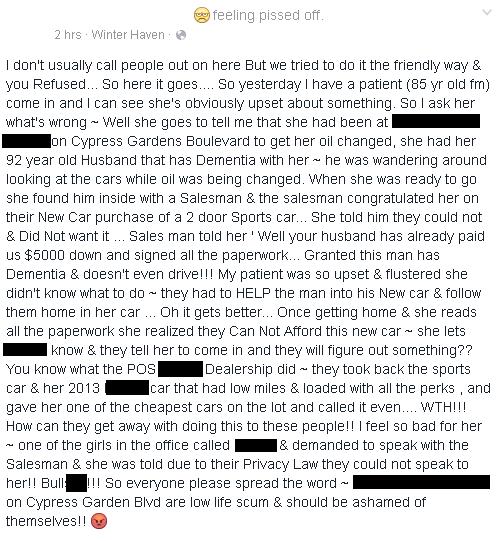 Winter Haven, Florida – A facebook post Tuesday afternoon has some Polk County residents upset. The post which we have attached is based off a really serious misunderstanding. We spoke to the woman who purchased the car and Joe Wagner with Winter Haven Honda. Again the social media post was extremely incorrect.

The post: So yesterday I have a patient (85 yr old fm) come in and I can see she’s obviously upset about something. So I ask her what’s wrong ~ Well she goes to tell me that she had been at Winter Haven Honda on Cypress Gardens Boulevard to get her oil changed, she had her 92 year old Husband that has Dementia with her ~ he was wandering around looking at the cars while oil was being changed. When she was ready to go she found him inside with a Salesman & the salesman congratulated her on their New Car purchase of a 2 door Sports car… She told him they could not & Did Not want it … Sales man told her ‘ Well your husband has already paid us $5000 down and signed all the paperwork… Granted this man has Dementia & doesn’t even drive!!! My patient was so upset & flustered she didn’t know what to do ~ they had to HELP the man into his New car & follow them home in her car … Oh it gets better… Once getting home & she reads all the paperwork she realized they Can Not Afford this new car ~ she lets Honda know & they tell her to come in and they will figure out something?? You know what the POS Honda Dealership did ~ they took back the sports car & her 2013 Nissan car that had low miles & loaded with all the perks , and gave her one of the cheapest cars on the lot and called it even…. WTH!!! How can they get away with doing this to these people!! I feel so bad for her ~ one of the girls in the office called Honda & demanded to speak with the Salesman & she was told due to their Privacy Law they could not speak to her!! Bullshit!!! So everyone please spread the word ~ Winter Haven Honda on Cypress Garden Blvd are low life scum & should be ashamed of themselves!

The Facts: The DailyRidge.Com spoke with Liz the woman who purchased car. Either she misspoke while being upset at her husband or the person who posted misunderstood what she was upset about. According to Liz she did go and get an oil change. However she saw the car and really liked it. She has had two door sports cars before. She wanted to show it to her husband to see if he would like it. The dealership allowed her to drive the car home and the salesman followed in the woman’s car. The man did like the car and told his wife he wanted to buy it. The salesman drove the car back to the dealership and the next day the husband gave his wife a check for $5,000 down on the car. She went and purchased the car and was on the car from day one. A few days later the couple had buyers remorse because the husband cannot get in and out of a 2 door sports car. They have since switched cars and gotten all the upgrades and items that they wanted and needed on the car. The wife was upset that the husband and her bought the car, because they really didn’t need the payment. However now they are happy and received money back on the car. This was all done prior to the facebook post. Liz had nothing but wonderful things to say about Winter Haven Honda.

The morale of the story is to make sure you get all the facts from the people involved prior to posting information on facebook. We would all agree that if this couple was really taken advantage of then someone should do something. Just remember everything isn’t always as it seems.