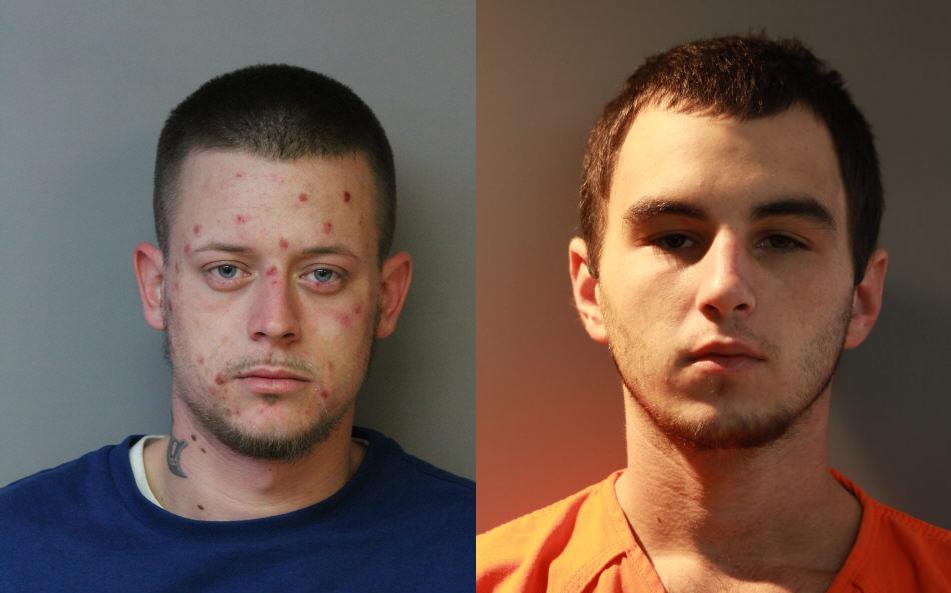 Lake Wales, Florida – On May 14, 2016 at approximately 12:40p.m., Rita Nicely was robbed by Brandon Tyler Mavity and Brandon Pitts when she was exiting the grocery side of Wal-Mart located at 2000 State Road 60 East in Lake Wales. Ms. Nicely 77 years old and is from Lake Wales. She had just finished shopping at Wal-Mart. She was pushing a shopping cart with her purse in the seat of the cart and her hand on the purse strap. As Ms. Nicely neared the first parking island, Mavity ran up from behind her and snatched the purse out of the cart and from her grasp. Pitts was standing nearby as a lookout. Mavity ran towards where Pitts was standing to the east. Before they could leave the parking lot, another shopper, was on her way into Wal-Mart and saw the robbery occur. She chased after Mavity but he dodged her. Mavity and Pitts fled the area east and into the orange grove.

Lake Wales Police were initially dispatched to Wal-Mart for a disturbance. Once officers were on scene, they learned a robbery had occurred. The entire shift responded to the area. They were supported by three off duty Lake Wales Police Officers who were in their department vehicle working an off duty detail. Lake Wales K9 Officer Waldron and his dog Rhaegar and Officer Esaul Hernandez began a track of the suspects immediately. The shift and off duty officers immediately set up a perimeter. Polk County Sheriff’s deputies assisted with the perimeter and their Air Unit was requested. Sergeant Michael Smith, one of the off duty officers, saw the suspects cross State Road 60 north bound. Officers and deputies closed in the perimeter and locked down the neighborhood streets of Evergreen, Martha and Grant. Residence in this area began to point out different locations where the suspects were running to. Polk County Air Unit arrived on scene and was given a description and general location of the suspects. Within seconds of arriving on scene, residents in this neighborhood began to point out to area where the suspect had run. Air immediately located the suspects hiding beside a residence and directed the K9 team to them. Mavity and Pitts tried to hide and then run from Air Unit but the Air Unit kept them in sight. The K9 team saw Mavity and Pitts running and gave K9 warnings for them to stop. Mavity and Pitts gave up and went to the ground where officers took them into custody. They were still in custody of the victim’s phone. Officers walked the path Mavity and Pitts had taken and were able to recover the victim’s purse and most of its contents.

Mavity and Pitts each have a career in crime and both had active warrants. Mavity is 22 years of age and lives at 285 Lake Avenue South in Frostproof. Mavity’s many arrests include charges for burglary, armed burglary, grand theft, theft of a firearm, possession of a firearm by a convicted felon, driving on a suspended license, giving false information to a metal recycler, dealing is stolen property, fraud-insufficient funds, possession of marijuana, possession of drug paraphernalia, failure to appear, and violation of probation. Pitts is 21 years of age and lives at 3778 Shetland Drive in Lake Wales. Pitts’ many arrests include charges for improper exhibition of a firearm, aggravated trespassing on property, violation of injunction against repeat violence, driving on a suspended license, violation of probation.

The Lake Wales Police Department is thankful the victim was not injured during this violent incident which could have gone bad. We are also very appreciative of the witnesses and the community for their assistance in catching Mavity and Pitts. As a result of this community and great team work between the Lake Wales Police Department and Polk County Sheriff’s Office, citizens of both the city and the county can rest at ease tonight that these two violent criminals are in jail where they belong.