Three People In Custody After Using Craigslist to Commit a Robbery 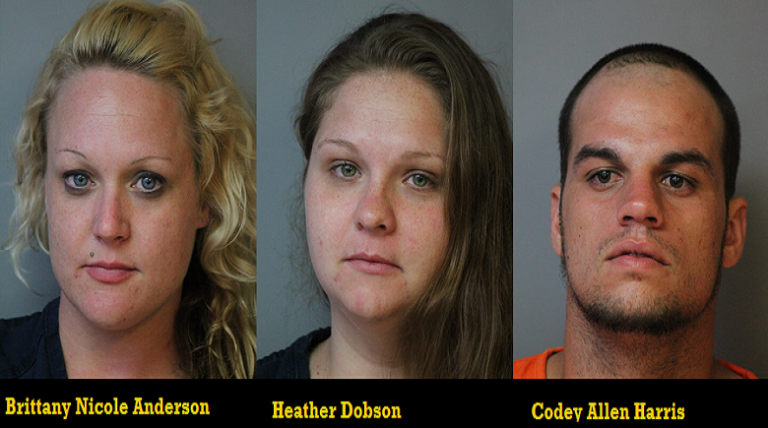 WINTER HAVEN – Three people are in custody after using Craigslist to gain the trust of the victim, ultimately robbing him of $300 cash and two cell phones.

On 4-26-16 at approximately 1:40 p.m., Winter Haven Police were called to the Royal Inn (3525 Lake Alfred Rd., Winter Haven) where the victim, 25 year-old Sedrick Ossie, Jr. was located. Ossie stated that he had just been robbed of more than $300 and two cell phones. Ossie knew one of the suspects, 31 year-old Brittany Nicole Anderson (DOB 11-18-84, 455 Marcum Rd., Lakeland) because of a recent Craigslist post.

Ossie saw a post on Craigslist that Anderson had recently placed on the site. The post stated that she (Anderson) was looking for a roommate as soon as possible. Ossie responded to the post and the two ultimately met in person on 4-25-16. After the initial meeting, Anderson left and Ossie went back to his motel room.

On 4-26-16, the pair spoke on the phone and Anderson agreed to meet Ossie at his room at the Royal Inn. After she arrived around 11 a.m., they left to go get food. Ossie told detectives that Anderson was texting on her phone quite a bit on the ride back to the motel. Once they got back to the motel, Anderson went into the restroom for approximately 10 minutes. When she came out, Ossie stated he went into the restroom to wash his face while Anderson went outside to her vehicle. When Ossie stepped out of the restroom a couple minutes later, 23 year-old Heather Dobson (DOB 8-11-92, 5810 Green Pond Rd., Polk City) and 24 year-old Codey Allen Harris (DOB 7-10-91, 584 ST Rd 559, Winter Haven) rushed into the room. Harris was pointing a black handgun at the victim while Dobson immediately sprayed Ossie in the face with pepper spray.

Ossie fell to the floor and Harris held him down with the gun at his neck while Dobson found Ossie’s pants where cash was located. She also took two phones from the dresser. At this point, Anderson appeared at the doorway of the room and yelled to Dobson and Harris, “come on guys, let’s go,” and the pair ran out of the room.

Ossie looked out of the window and saw Anderson drive off in her vehicle (white Mitsubishi) and the other two jumped into a maroon Chevy Impala. Both vehicles went south on Lake Alfred Rd.

Winter Haven Police put out a BOLO (Be on the Lookout) for the two vehicles and shortly afterwards, a Polk County Sheriff’s Deputy saw both vehicles travelling westbound on Hwy 92. The Deputy was able to see both drivers and verified the description of those who were at the Royal Inn where the robbery occurred. Ultimately, the Deputy caught up to the vehicles and the occupants at the Shell gas station at US 92 and Old Dixie Hwy.

The three were positively identified as the suspects in the robbery and were all taken into custody without incident. When Winter Haven Police detectives inventoried the vehicles, a black pellet gun (believed to be the gun held to the victim’s neck) was found in the passenger door of the Impala where Harris was seen sitting. Three hundred dollars in cash was found in the door of the white Mitsubishi that was being driven by Anderson along with pepper spray located inside of the console of her vehicle. A pair of black and white shorts belonging to the victim were also founding he back seat of Anderson’s vehicle.

All three were booked into the Polk County Jail for Robbery With A Firearm/Deadly Weapon (FL).

Harris has been arrested for Possession of Marijuana and Battery.