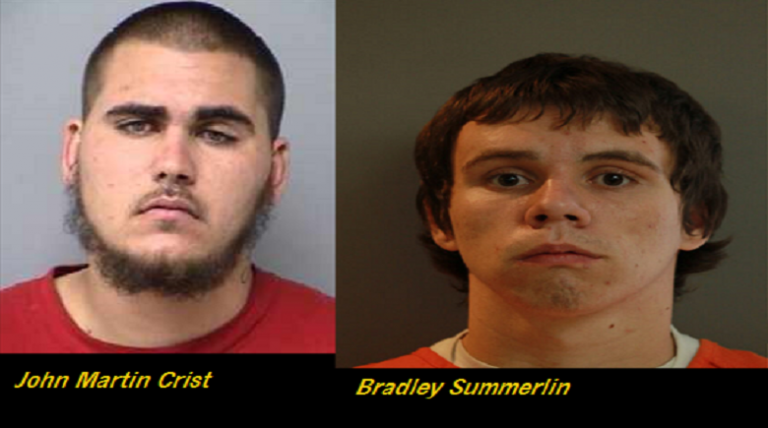 An armed carjacking and robbery that occurred at a Winter Haven Walgreens has ended up with two arrests, one warrant for an arrest and a crashed car just outside of St Augustine.
Arrested at the crash scene in St. Johns County by Florida Highway Patrol was 19 year-old John Martin Crist of St. Augustine. Crist was charged with Grand Theft Auto and Fleeing to Elude. (Please contact the Florida Highway Patrol for any information involving these charges.)  Winter Haven Detectives have charged Crist with Armed Robbery With A Firearm and Armed Burglary. Also in the car was 16 year-old Mariah Gage from Wahneta who was reported missing as a runaway on Feb. 23, 2016. Gage also had a juvenile pickup order for Violation of Probation through the Polk County Sheriff’s Office(PCSO case 16-8409).
The third person in the vehicle who was not captured has been identified as 18 year-old William Bradley Summerlin (DOB 11-18-97, 2405 Hwy 60, W., Bartow). A warrant for the arrest of Summerlin has been obtained by Winter Haven Detectives for Armed Robbery With A Firearm and Armed Burglary. Detectives are asking the public for any information on the whereabouts of Summerlin. Tips can be called in to Heartland Crime Stoppers at 1-800-226-TIPS (8477) Callers can remain anonymous and could be eligible for a CASH reward of up to $3,000.
The events unfolded like this:
On 3-1-16 just after midnight, the victim, 50 year-old Sandra Hunter had just left work when she stopped at Walgreens (705 First St., S, Winter Haven) to purchase a gift card prior to heading home. As the she pulled into the parking lot, Hunter sent a text message to her son. She was sitting inside of her car while texting her son.
During this time, a white male wearing a hooded jacket, shorts and tennis shoes is seen pacing a couple of times in front of the car. Approximately two minutes later, the male approaches the driver’s door and opens the door demanding Hunter get out. When Hunter looked up, she was facing the barrel of a gun pointed at her while the suspect was demanding her vehicle. As she attempted to get her purse prior to exiting the vehicle, the suspect again demanded her to exit the vehicle and leave the purse and cell phone inside.
Video shows the suspect placing Hunter on the ground and telling her to stay on the ground. Once the suspect gets into the driver’s side, another white male wearing a gray hooted jacket, black shorts and red shoes runs over to get into the passenger side. They two suspects back from the parking space and leave the parking lot. At this point, the victim goes into Walgreens and calls 9-1-1. Although extremely distraught and shaken up, Hunter was not injured.

Approximately four hours later, a Florida Highway Patrol Trooper was conducting patrol along I-95 in the area of SR 207 in St. Augustine (St. Johns County) when he encountered a dark gray Toyota traveling approximately 108 mph on I-95. The trooper attempted to stop the Corolla when the driver crashed the car in the median. The three occupants of the car fled from the scene. Two were captured immediately and one remains at large. The two captured, 19 year-old John Martin Crist and 16 year-old Gage, were taken into custody in St. Johns County. (Please contact St. Johns County or the Florida Highway Patrol for information on those charges.) Gage is not charged in the original carjacking, however she was picked up by Crist and Summerlin in Winter Haven prior to leaving the area. During her interview, Gage told Detectives that the group made plans to steal a car in order to head to Jacksonville to “hit a lick” (commit a robbery.)
Once the information on the vehicle was entered by FHP, it came back as stolen from Winter Haven. FHP officials contacted Winter Haven and Detectives immediately traveled to St. Johns County to conduct interviews and collect evidence found inside of the vehicle. FHP recovered a revolver inside of the vehicle that is believed to have been used in the original incident in Winter Haven. It has not been determined yet when Crist and Gage will be returning to Polk County.
Summerlin remains at large at this time.  He is considered extremely dangerous. Anyone with information on the whereabouts of Summerlin is asked to call Heartland Crime Stoppers at 1-800-226-TIPS (8477). Callers can remain anonymous and could be eligible for a CASH reward of up to $3,000.