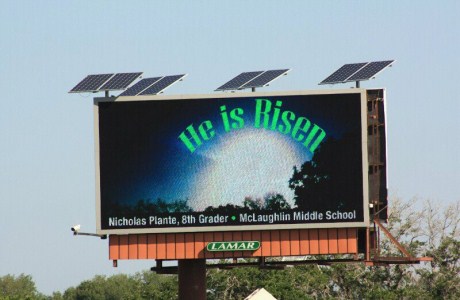 Lake Wales, Florida – I don’t personally know Nicholas Plante. I know that he is a friend of ours on facebook, but so are about 4300 other people. The fact that I know about Nicholas specifically is a testament to what this young man has accomplished in the last 8 months. Nicholas and his family came here from New York. He had some difficulty at first as his mother would point out. He was in remedial reading, not caring about anything, from a much smaller middle school than McLaughlin Middle & Fine Art Academy. And a separated family that put extended stress on him.
Nicholas had a talent for art. It helped that Nicholas is an 8th grader at McLaughlin Middle & Fine Art Academy and he had a dedicated mentor. Tim Williams a local businessman stepped up and helped to mentor Nicholas. Tim’s help, a committed family and the ability to express himself through art helped propel Nicholas to greater heights.
Nicholas Plante with his digital photograph which was honored by the Polk Museum of Art.

Nicholas has been recognized with numerous art awards. He was recognized with the Polk County Art Museum Sponsor’s Art Award for his digital macro photograph. He was also awarded a monetary award from Ridge Art Association Young Artists Show. With the assistance of Nick’s mentor, Tim Williams, his artwork was seen by thousands as they passed a Lamar Billboard here in Lake Wales. The art could be seen during the Easter Holiday displayed on a billboard on Hwy 27 across from the mall. According to Lamar Advertising Mr. Williams contacted them showing some of Nick’s art pieces and they chose one for the holidays.

Nicholas would go on to excel in other areas along with art. He would be on the Honor roll, take honors classes, join the Honor Society and become a Lake Wales Scholar. Nick’s mother is extremely proud of him and amazed at how he is able to “keep it all together”.
Nicholas is on a great path to wonderful things in the future. We believe hard work and talent will pay off big in his future. Great Job Nicholas!