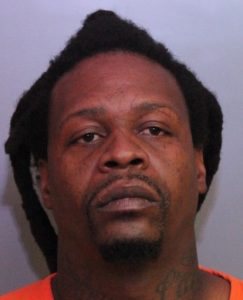 Ronal Augustin (37 years-old,  Ave L NE, Winter Haven) was stopped by a Winter Haven K-9 Officer Garcia just after midnight Sunday morning because he was driving without any lights. The lawful traffic stop ended up being much more than a reminder to turn on headlights.

As the officer was speaking with Augustin, he smelled what he believed was marijuana and asked Augustin if there was anything illegal in the vehicle. Augustin told the officer, “If you are smelling weed, it’s probably coming from my clothes because I smoked some earlier.” According to Augustin, he had a medical marijuana card, however the card he produced was expired.

The officer asked if he could search the vehicle and Augustin consented to a search.

Officer Garcia retrieved his K-9 partner Logan and they began the search. Logan immediately alerted. In the backseat of the vehicle were two large suitcases, both containing large amounts of marijuana packaged in heat sealed plastic bags and in the shape of blocks, all totaling 47 pounds. 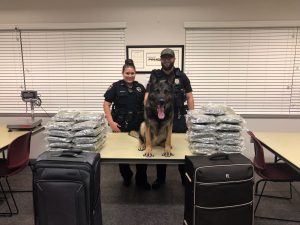 Also found was a loaded handgun on the driver’s side floorboard next to the brake pedal. The handgun was found to be stolen out of Clayton County Georgia.