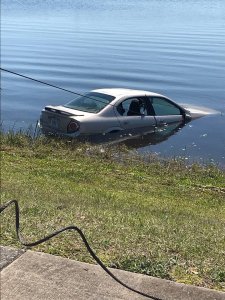 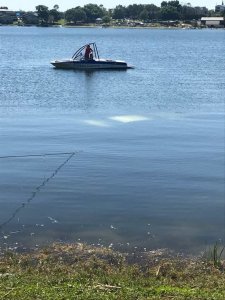 Today at 10:30 a.m., a 2002 Nissan Maxima driven by 33 year-old Henry Saint-Hilaire (Ave. B SW, Winter Haven) was traveling northbound on First St. around Lake Silver. His wife (Suzanne) and 2 year-old daughter Zahlia were also inside of the vehicle.
According to Saint-Hilaire, as he rounded the curve to the left, the vehicle steering locked to the left causing the vehicle to travel into the lake. The car immediately began to submerge.
A boat on the lake driven by Andrew Petzold rushed over to the sinking vehicle and assisted additional citizens who had stopped to render aide. Petzold broke the driver’s side window pulling the driver out. (At this time, I do not have information on the other citizens who assisted. Once I receive that, I will send that out)
All occupants were rescued from the vehicle just before it completely sank to the bottom of the lake. There were no injuries, however all three occupants were taken to Winter Haven Hospital to be checked out.
It took officials until 2:30 to secure a vehicle to remove the car from the lake.
“This is just one more example of the wonderful citizens in Winter Haven coming to the rescue without hesitation,” said Public Safety Director Charlie Bird. “This family undoubtedly survived this crash because of these good Samaritans who took no regard for their own safety to ensure the family was rescued.”