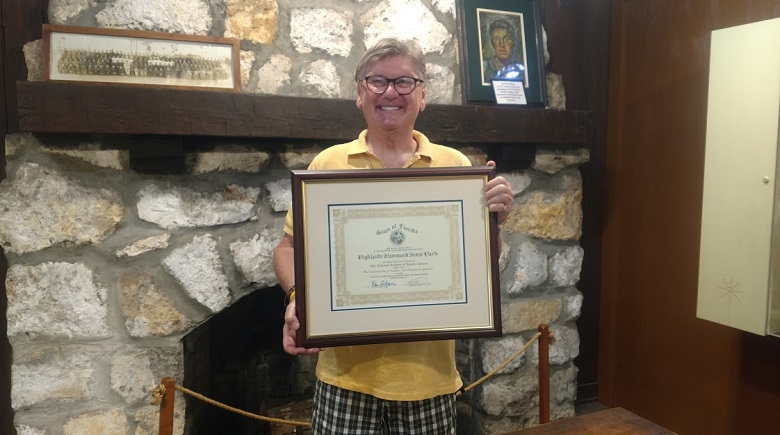 Sebring:  Highlands Hammock State Park will present ‘The Civilian Conservation Corps in Florida: State Parks and More!’ at 7:00 p.m. on March 19 in the park recreation hall.  Highlands Hammock is home to the State of Florida Civilian Conservation Corps (CCC) Museum.  The Civilian Conservation Corps was the first of several New Deal era programs to put thousands of young men to work in the Great Depression.  CCC Museum curator David Schmidt will examine how Highlands Hammock and the seven other CCC parks in Florida came into existence.  According to David Schmidt, “The majority of CCC parks were developed in Florida because much of the land was free and either donated or sold for a song.”  Schmidt cited Myakka River State Park as one example in which 17,070 acres of the Honore estate in Sarasota were sold for 37.5 cents per acre and an additional 2000 acres were donated by the family with another 8000 acres of Myakka River acquired due the inability of landowners to pay taxes in those lean times.

Schmidt, who is a Roosevelt scholar, will present an overview of CCC projects from the Florida Keys to the Panhandle that were completed by nearly 50,000 CCC ‘boys’ from Ramrod Key to Florida Caverns in Marianna.  After the 1935 Labor Day hurricane, CCC boys assisted the Works Project Administration in working on the Key’s Seven Mile Bridge and the Overseas Highway.  In Sebring, CCC boys were active from August of 1933 through December 1, 1941 at one of the longest running CCC Camps in the country.  Most of the work in Florida was done inland and involved forestry, fire prevention, firefighting, planting trees, fencing, and insect control.  “The Florida Board of Forestry was very much involved in the acquisition, planning and development of CCC parks and fencing was completed to keep cattle from being free range due to a deer tick infestation,” Schmidt stated.

“We are extremely pleased with the recent listing of the park on the National Register of Historic Places, and we are now able to seriously acknowledge the historical significance of the development of the original Roebling property and the work that was completed by the CCC which evolved into Highlands Hammock State Park,” Schmidt remarked.  “We hope that this sparks a renewed interest in the park and its history,” Schmidt concluded.

A ‘meet and greet’ informal discussion at 6:00 p.m. precedes the lecture.  Visitors may park in the overflow field and walk or take a tram shuttle to the recreation hall. ADA handicap parking will be available at the hall. This program is sponsored by the Florida Humanities Council with funds from the Florida Department State, Division of Cultural Affairs and the Florida Council on Arts and Culture, Highlands Hammock State Park, and the Friends of Highlands Hammock State Park, Inc. Highlands Hammock is located at 5931 Hammock Road in Sebring. Park entry fees are waived after 6:00 p.m. For more information on this program and other park events, call 863-386-6094, and visit FloridaStateParks.org/park/Highlands-Hammock.