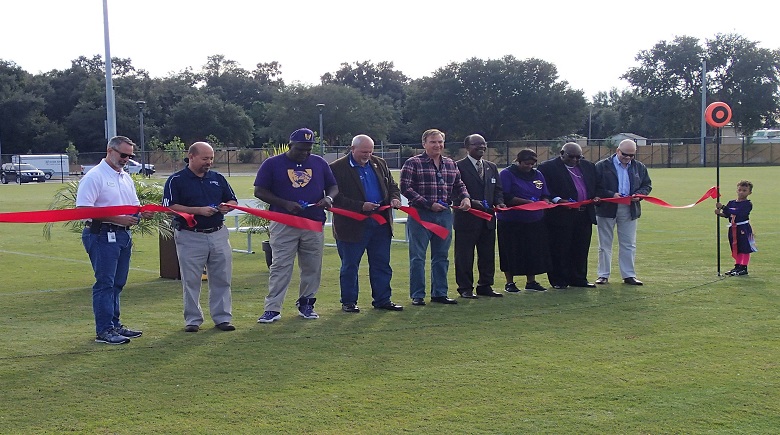 Are you ready for some football? The City of Winter Haven certainly is now that it has officially opened a new football stadium as part of the new Lake Maude Park.

The park officially opened to the public with a grand opening ceremony on Saturday morning, and was dedicated with city officials cutting a ribbon tied fittingly enough to two field post markers.

The $4.4 million project for the park was announced last November. The ground breaking ceremony was hosted earlier this year in January.

James Hogan, the football director for the Wolverines, had attended the ground breaking ceremony earlier that year when the temperature was in the 30s.

He had remarked that it would be a cold day in Winter Haven before the park was ever completed. His words seemed to have since come true, as the temperature that morning during the ceremony was well in the 60s.

During his speech at the ceremony, he commended the other city officials for moving forward with the project and allowing it to be completed despite several delays and setbacks.

“These people could have easily let this project die on the vine, and we would not be standing here today; but I appreciate everything they have done, and how they kept this dream alive and the community,” he said. 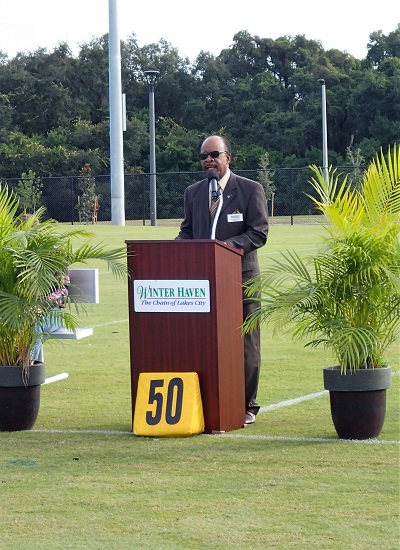 Mayor Pro-Tem Nathanial Birdsong mentioned how the recreational facility had been proposed in the 1990s, but several setbacks prevented the project from moving forward until recently.

With the project finally being realized and the construction being completed, such a victory was well worth coming out to celebrate regardless of the weather, Birdsong said.

“I will admit that I am a Floridian who loves the warm sunshine, and there have been cold days since the groundbreaking; however, it could be the most ugly rainy snowy day in Florida, and I will still be here because this park warms my heart…it is a perfect day,” he said. 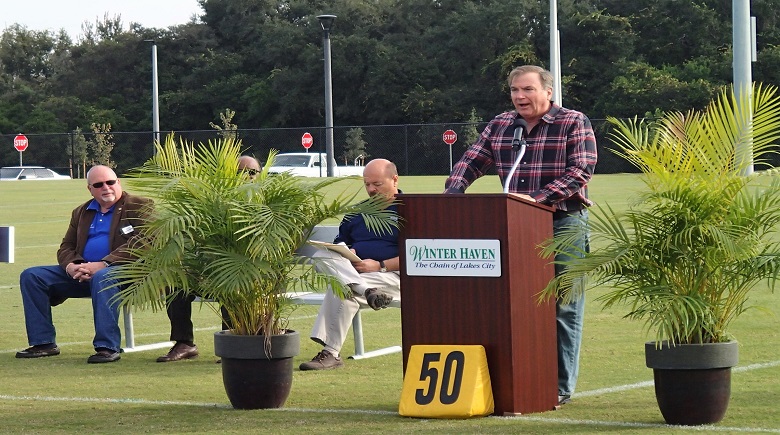 “To see this new complex come along the line with so many other improvements in our cities at the same time is certainly one of the rewards of being a mayor and elected official in this city,” he said.

“With the completion of this park, we now have the best of both worlds: residents can enjoy the calm lakefront of the nature park, but also the excitement of a football game or community event,” he added. “Just imagine taking your family to a football game or event, participating within the activities over here, walk across to the nature park, fish, have a lakeside lunch, and then come over here to enjoy more football and excitement.” 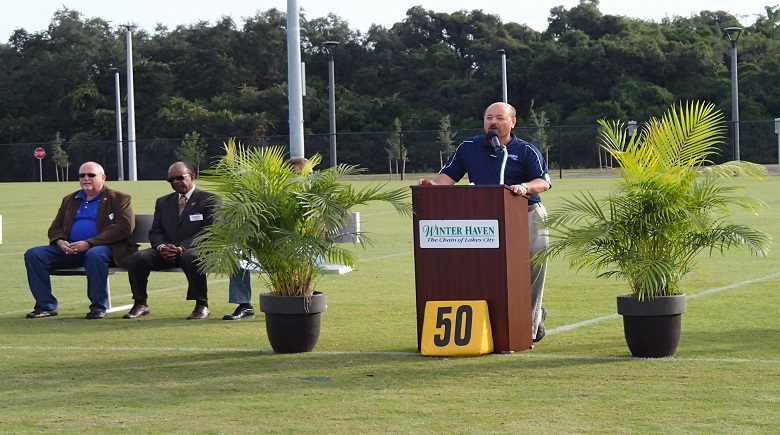 “Many of us will remember from our time as a youth where we were at a recreational facility such as this and parks, and those are those memories that shape us into the adults that we are today,” he said.

“I cannot understate the importance of this facility, the youth who will play in this facility will be the future leaders of our community,” he added. “That is critical to the health and viability of a community: to have opportunities for youth to be able to participate in sports and win and lose with grace.” 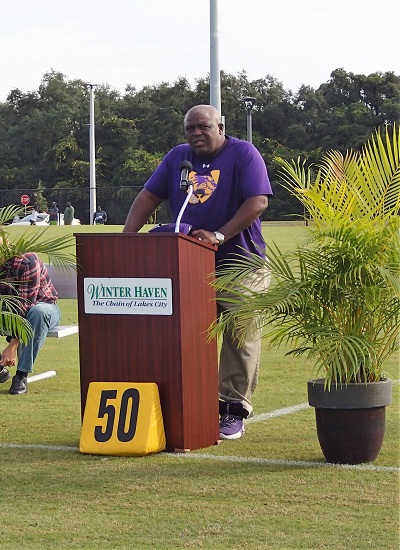 During his speech, Edwards read a few words from City Manager Mike Herr, for whom the park was the utmost highest priority.

Being able to provide such a recreational facility proved the city’s dedication to its residents and ensuring that they have the ability to seek quality rest and recreation within the daily lives, he said.

“Investing in neighborhoods and parks is very important to our legacy as a city,” he said. “It is my hope you will relish in making memories in this park and share them with future generations as they have their own experiences here.”

Lake Maude Park is located in Winter Haven along 7th Street NE, and is open daily from sunrise to sunset. 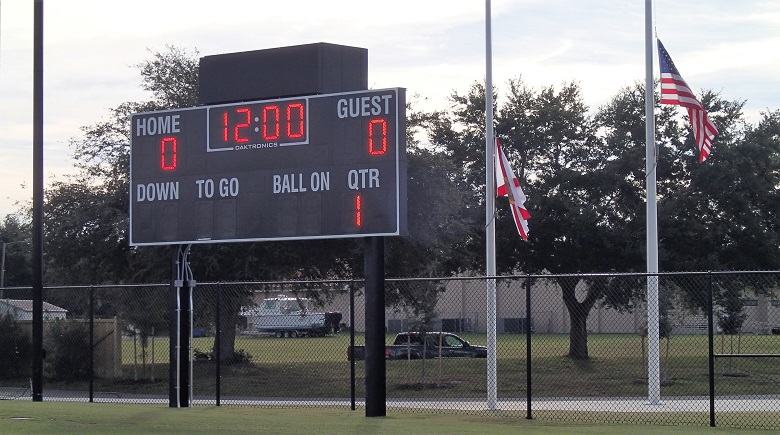 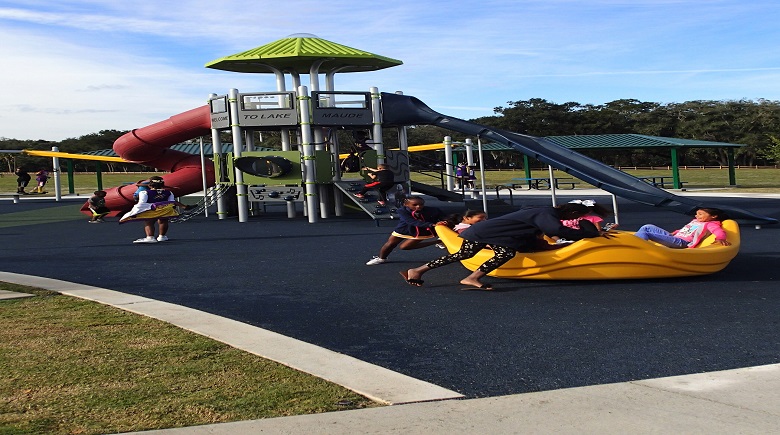 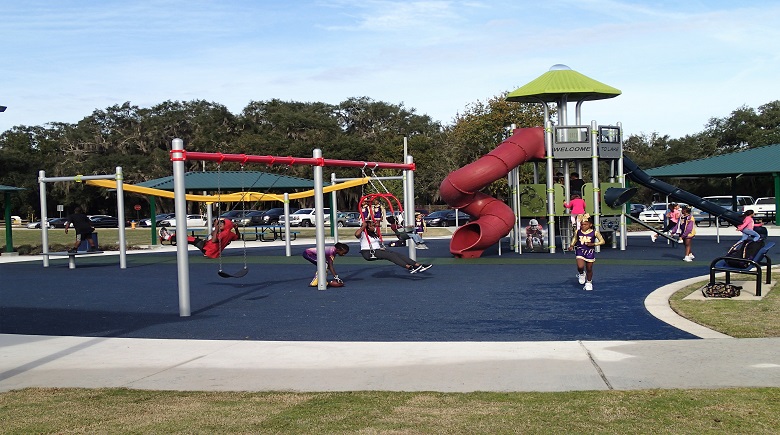