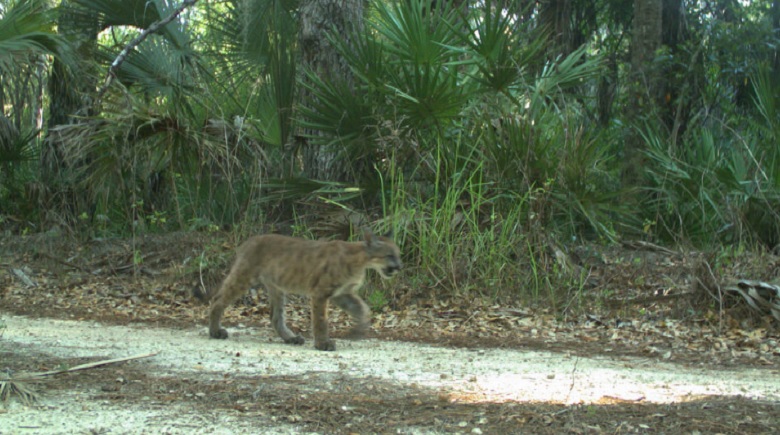 The Florida Fish and Wildlife Conservation Commission (FWC) has verified the presence of at least two panther kittens north of the Caloosahatchee River in southwest Florida. These kittens are presumed to be the offspring of the first wild female panther documented north of the river since 1973.
“This is good news for Florida panther conservation,” said Kipp Frohlich, deputy director for the FWC’s Division of Habitat and Species Conservation. “Until now, we only had evidence of panthers breeding south of the Caloosahatchee. These pictures of a female with kittens indicate there are now panthers breeding north of the river.”
Using trail cameras, biologists have monitored male panthers on various public and private lands north of the Caloosahatchee River for several years. In 2015, biologists collected a photo of what appeared to be a female panther in the FWC’s Babcock Ranch Preserve Wildlife Management Area in Charlotte County. They deployed additional cameras in the summer of 2016, and captured more images of what they believed to be a female panther.
“Early this year, the cameras captured images of a female that appeared to be nursing,” said Darrell Land, FWC panther team leader. “For many years, the Caloosahatchee River has appeared to be a major obstacle to northward movement of female panthers. This verification of kittens with the female demonstrates panthers can expand their breeding territory across the river naturally.”
“This is a major milestone on the road to recovery for the Florida panther,” said FWC Chairman Brian Yablonski. “We are mindful and appreciative of all the many partners and cooperators who have supported panther conservation efforts over the years leading to meaningful moments like this.”
The FWC works closely with the U.S. Fish and Wildlife Service to ensure panther conservation on both private and public lands. Staff also work to continue building support and cooperation among private landowners who maintain working landscapes and ranches that provide important habitat for panthers.
“This is good news for panther recovery, and the Service is committed to working with landowners to make panthers and private land ownership compatible,” said Larry Williams, State Supervisor of Ecological Services for the U.S. Fish and Wildlife Service.
Florida residents can support panther conservation efforts by purchasing a “Protect the Panther” license plate at BuyaPlate.com. Fees from license plate sales are the primary funding source for the FWC’s research and management of Florida panthers. These funds contributed to the successful documentation of this important panther conservation milestone.
You can help with panther research by reporting panther sightings, and uploading photos and videos to the FWC at MyFWC.com/PantherSightings.
For information about Florida panthers, including tips on how to safely coexist with them, visit MyFWC.com/Panther.
March 27, 2017

“Cat Tale” Lectures Tells How the Florida Panther was Saved

Welcome, World Travelers! Avatar: Way of Water is Brilliant But Way Too Long!