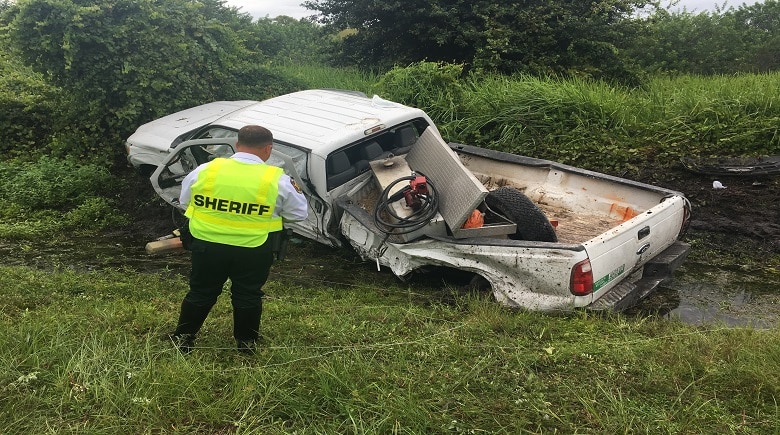 On Thursday, August 1, 2019, the PCSO Traffic Unit investigated a multi-vehicle crash in Fort Meade that resulted in one fatality. Preliminary information so far is as follows:

Around 4:00 p.m., a 2006 Mack semi truck with a tanker being driven by 41-year-old Sylvanah Dean (male) of Land O’ Lakes was heading southbound on US 17 in Fort Meade and attempting to turn left onto Vigiron Road, which is the entrance to a business (Appalachian Material Services). At the same time, a 2008 grey Ford F-350 truck with a utility trailer being driven by 30-year-old Kevin Brown of Bartow was heading northbound on US 17. As the semi made the turn, the Ford F-350 swerved to avoid striking it. The Ford lost traction and began rotating across US 17, at which time it collided with a white 2013 Chevrolet pickup truck being driven southbound by 37-year-old Jason Houston of Sebring.

Houston was taken to LRHMC with non-life-threatening injuries, and he is in stable condition and expected to be released. One of the three passengers in his Chevy truck, 19-year-old Jacob Martinez of Bowling Green, was taken to Bartow Regional Medical Center, where he later succumbed to his injuries. The two other passengers in his truck, a 19-year-old and an 18-year-old, were also taken to Bartow Regional, with minor injuries.

Dean, the driver of the semi, was not injured.

The investigation is ongoing. Neither distraction nor excessive speed appear to be factors for any of the drivers.