The City of Winter Haven expressed their support and solidarity for members of the LGBTQ+ community living within the city limits through a proclamation offered on Monday.

During their monthly meeting at Winter Haven City Hall, the Winter Haven City Commission presented a proclamation expressing the city’s support for tolerance of all sexual orientations, gender identities, and gender expressions, and officially recognizing the week of June 8 to June 15 as “LGBT Pride Week.” 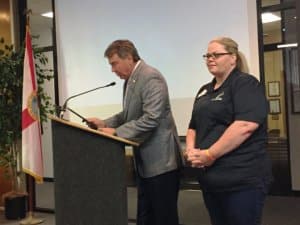 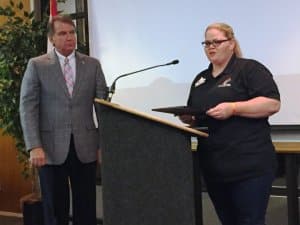 The proclamation, read by Winter Haven Mayor Brad Dantzler, was as follows:

“Whereas Winter Haven, Florida is part of the global community in which people of diverse cultural races, creeds, genders, and sexual identities must work together towards peace and understanding;

And whereas the lesbian, gay, bisexual, and transgender residents, students, city employees, and business owners in Winter Haven contribute to this vibrant, innovative, culturally-inclusive, world-class community and to its diversity;

And whereas various advancements have been made in respect to equal rights for all people including the LGBT community throughout the state of Florida and the United States;

And whereas members of the LGBT community still face ongoing discrimination based on their innate status, resulting in measurable human tragedy and loss of life, community-wide isolation and abuse;

And whereas PFLAG of Polk County envisions a world where diversity is celebrated and all people are respected, valued, and affirmed inclusive of their sexual orientation, gender identity, or gender expression;

And whereas the Lakeland Youth Alliance provides a safe space for LGBT youth and their straight allies of Polk County;

And whereas to celebrate the richness and diversity of Winter Haven, PFLAG of Polk County and Lakeland Youth Alliance, along with various community organizations, businesses, and individuals will conduct various cultural, educational, and entertainment activities from June 8 to the 15, 2019, to focus attention on the importance of acceptance and respect for diversity among us;

Now therefore I, Bradley T. Dantzler, Mayor of the City of Winter Haven, Florida, do hereby proclaim June 8 to the 15, 2019 as LGBTQ Pride Week in the City of Winter Haven, Florida in honor of freedom from bias and discrimination of any form, and in recognition and praise of those members of our community who constantly fight the battle for equal treatment for all citizens, regardless of sexual orientation, gender identity, gender expression, race, color, creed, ethnic origin, or religion.”

The proclamation was one of several other proclamations officially recognizing this week as “LGBT Pride Week” that were presented at city meetings throughout Polk County. Other proclamations have been or will be offered in cities such as Lakeland and Bartow.

These proclamations are being presented by their respective cities, in cooperation with local LGBT organizations such as the Lakeland Youth Alliance and PFLAG of Polk County, to express support for city residents of various sexual orientations, gender identities, and gender expressions within the LGBTQ+ community.

Krissy Lally, President of PFLAG of Polk County, attended the meeting that evening to accept the proclamation on behalf of her organization. She was especially moved by how this proclamation was offered a few days from the anniversary of the Pulse shooting in Orlando, which took the lives of several individuals of LGBTQ+ identities.

“That week…I remember the outpouring of love and support,” she said. “Every time I walk into this room, those emotions come back to me. So I want to thank the community of Winter Haven for your continued support, love, and acceptance.”

Lally appreciates how Winter Haven and other cities within the county are willing to make such proclamations, revealing the social progress that has been made thus far regarding individuals of different sex and genders.

“I think it goes to show that the city supports the local community,” she said. “I think it is very important for the citizens of Winter Haven to understand that their commission and their elected officials support them.” 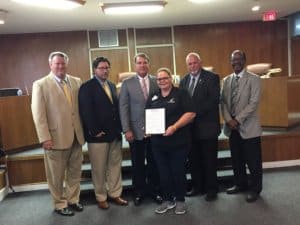 PFLAG of Polk County and Lakeland Youth Alliance are currently hosting several community events throughout the county this week in celebration of LGBT Pride Week, as well as LGBT Pride Month this month. Their big celebration will be Pride in the Park on Saturday at Munn Park in Lakeland, the largest Pride event in the county.

For more information about LGBT Pride Week, read more about this year’s events at the Polk Business Directory: https://polkbusinessdirectory.com/events/polk-pride-week-celebrating-fifth-annual-event-in-lakeland/