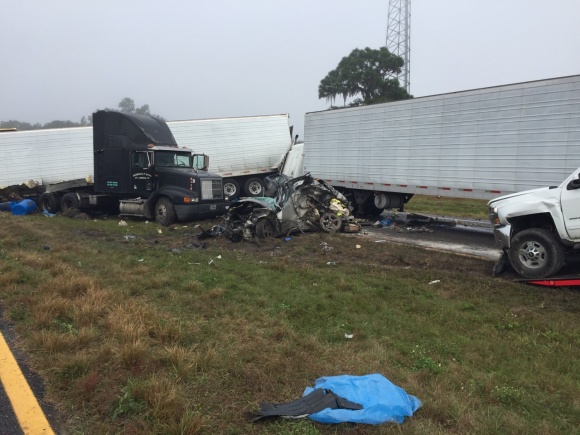 Update to traffic crash on SR 60 in Lake Wales this morning:

The drivers’ names are as follows:

Saab SUV (the crumpled vehicle in the photo I sent out): 46 yr old Christopher Ellis of Fort Meade – he’s in stable condition at LRHMC and expected to recover

No information on the person in the seventh vehicle, which was a vehicle hit by a barrel while traveling eastbound.

Westbound is still shut down in that area.

The PCSO Traffic Unit is working a seven-vehicle crash on SR 60 East in Lake Wales this morning. Very preliminary (and subject to change) information is as follows:

At 6:00 a.m. this morning, two semi tractor-trailers were heading westbound in the outside lane on SR 60 East, near Logistics Parkway, when for unknown reasons, the second semi rear-ended the first semi. The second semi jackknifed in the road way. It had barrels of liquid used in orange juice concentrate loaded onto it.

When that crash occurred, an SUV that was also heading westbound in the outside lane, swerved into the inside lane to avoid hitting the jackknifed semi. The SUV was unable to avoid hitting the jackknifed semi, and crashed into it, and was then hit by a pickup truck and another semi that were heading westbound in the inside lane.

When the SUV struck the jackknifed semi, it caused barrels from the trailer to be ejected into the eastbound lanes of SR 60 East, and the barrels struck two vehicles that were heading eastbound.

The adult male driver and sole occupant of the SUV was transported to LRHMC in extremely critical condition.

The driver of the jackknifed semi was transported to WHH with non-life-threatening injuries.

The driver of the third semi, that was in the inside lane, was transported to WHH with non-life-threatening injuries.

No other vehicle drivers or occupants were injured or transported.

The investigation is ongoing. Fog is still VERY HEAVY in the area. Motorists are asked to slow down, use headlights, and avoid this area completely.

SR 60 is shut down completely in this area.