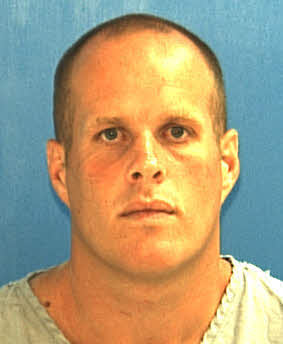 Lake Wales, Florida -In the early hours of Monday , August 29, 2016 Lake Wales Police Officers responded to a burglary alarm call at Sky Power Sports on Hwy 27. The alarm came in at 1:50am. Officers Travis Worley and Mike Jones were in the area patrolling in the LWPD Polaris and they arrived on scene within minutes. As they approached the rear of the business they noticed a white truck (unknown make/model) parked with the passenger door open. The vehicle was not running but was occupied by a male who was in the driver’s seat. Both officers approached and ordered the man out of the vehicle. The man refused to comply, hit Officer Worley with the driver’s door, struck him with his left arm, and attempted to start the truck. Officer Worley reached in the truck to try to stop the suspect from starting the truck and fleeing. The suspect actively resisted, was able to get the truck started, and in gear. As the suspect started driving Officer Worley was partially in and partially out of the cab of the truck. With the truck beginning to accelerate Officer Worley let go and fell from the vehicle. The suspect then fled in the truck northbound on HWY27. Officers began pursuing the suspect as he fled. Stop sticks were deployed at a couple locations which caused at least two of the suspect’s vehicle tires to flatten but he continued to flee. The pursuit went north on HWY27 to I4 and once at I4 the suspect went eastbound. The suspect continued to flee into Osceola County where he abandoned the vehicle and fled into a residence of a friend a home on Georgia Ave in St. Cloud, FL. There he was taken into custody for additional charges by Osceola County SO. The suspect was identified as Erik A Ramos (DOB 06/17/1981) a Saint Cloud resident.

Officers learned at Sky Power Sports there had been two suspects at the scene committing a burglary. The suspects had used tools to cut the fence open and steal property. At this point in the investigation it was determined two rims/tires were taken. Additional property may be reported as the investigation develops. The second suspect was never seen by officers and at this point has not been identified.

Officer Worley sustained no major injuries from the incident but is sore and bruised. No other injuries were reported as a result of this incident. This pursuit involved a multiple law enforcement agencies including the Lake Wales Police Department, Polk County Sheriff’s Office, Lake Hamilton Police Department, and Osceola County Sheriff’s Office.

Ramos, who has an extensive criminal history, was booked into the Osceola County Jail. At this point in the investigation Ramos is being charged by the Lake Wales Police Department with burglary, battery on a law enforcement officer, resisting arrest with force/violence, grand theft, and fleeing to elude. Additional charges from the Lake Wales Police Department may result from the investigation. Also, Ramos may be facing charges from the other agencies which were involved. We have no dashcam video of this incident. I am not able to access a current book in photo of Ramos. Attached is a 2011 book in photo from the Department of Corrections. This investigation is active and still ongoing. Anyone who has information on this case is asked to contact Detective Stephanie Goreck at (863) 678-4223 extension 269 or Heartland Crime Stoppers at (800) 226-8477.