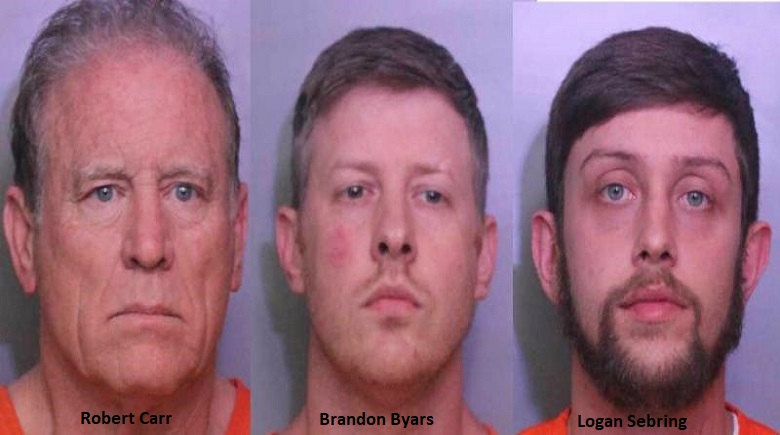 The men arrested were: Robert Carr, 66-years-old from Thonotosassa; Brandon Byars, 37-years-old from Tampa; and Logan Sebring, 24-years-old from Bayonet Point. Carr served with Tampa PD for five years, and is currently an attorney who owns the Resolute Law Group, and also happens to be representing Logan Sebring in a previous criminal case.

According to the affidavits, HIDTA detectives had become aware of possible drug trafficking by Byars, and began investigating him. An undercover detective arranged to meet Byars to make a narcotics transaction. Byars said that he would be coming with his supplier, who would have to see the money first. The deal was for one-to-four kilos of cocaine at $25,000 a kilo.

Surveillance was conducted on the suspects prior to the agreed transaction location. They were first observed in the parking lot of a north Lakeland restaurant, Byars was in a Ford F-150, and Carr drove a Kia Optima with Sebring as his passenger. While there, all three men were seen looking into the trunk of the Kia. They got into the vehicles, and proceeded to the parking lot of a nearby store to make the transaction.

The detective met there with the men. Sebring removed a backpack from the Kia, and handed it to Byars, who handed it to the detective. All three suspects were then arrested. The substance inside the backpack tested positive for cocaine. The total amount of cocaine recovered weighed 998.41 grams.

“It doesn’t matter what walk-of-life you come from; if you come into Polk County with the intent to sell drugs, you’re likely going to end up staying in Polk County as our guest in the jail. It doesn’t matter if you’re an attorney, a former cop, or in this case—both, we’re going to lock you up.” – Grady Judd, Sheriff