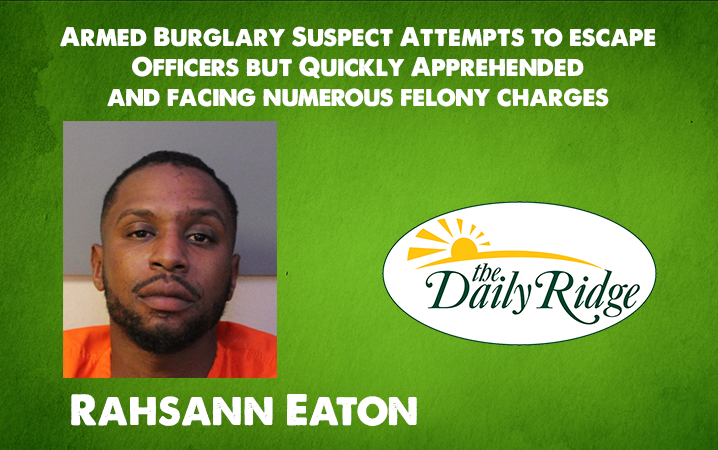 An armed burglary suspect attempts to escape officers, but is quickly apprehended and now faces numerous felony charges.
On March 4, 2020 at approximately 9:15 p.m., a 9-1-1 officers responded to a suspicious incident call at the Abbey Lane Apartments in Winter Haven. The call involved possible glass breakage at one of the apartments, however the caller was not speaking and the call taker heard glass breaking. Once on scene, officers started going to numerous apartments to find where the glass breaking sound had come from. After checking three areas, officers were approached by a female with obvious swelling on her face and she was visibly shaken and crying.

She advised that 33 year-old Rahsann Eaton (DOB 9-6-86) had come to her apartment and started banging and kicking the door. The victim did not answer the door and immediately called 9-1-1, but did not speak for fear of Eaton hearing her on the phone. Eaton then went to the back of the apartment and broke a window out which is the sound the call taker heard. Eaton sustained cuts on his hand and foot from the broken glass as he climbed through the window to enter the apartment.

He went to the upstairs area of the apartment where the victim and three small children were and he grabbed the victim’s cell phone while on with the 9-1-1 operator. Eaton looked at the phone and saw that the victim called 9-1-1 and then started punching the victim in the face numerous times. The victim ran out of the room and Eaton continued to follow her ultimately wrapping his arm around her upper body and holding a knife to her throat.  The children were still upstairs and were not physically injured. While holding the knife to her throat, he told her, “You want to call the cops on me? I’ll kill you!” the victim was able to wrestle the knife from Eaton and ran back upstairs throwing the knife out of an upstairs window.

Eaton caught the victim, tore off her shirt and wrapped his bleeding hand and left the area with her cell phone just prior officers arriving to the apartment complex. He was not immediately located. The victim and the children went to a family’s home for the night and officers continued to monitor the area in case Eaton returned.
At approximately 2:20 a.m. on March 5, 2020, officers patrolling the area found Eaton back at the apartment. They gained entry into the apartment and Eaton began fighting officers. K-9 officer Garcia deployed his partner Logan, which was successful ultimately allowing officers to place Eaton in handcuffs.

When officers took Eaton to Winter Haven Hospital to be treated for the cuts and dog bite, Eaton began wrestling officers again and was able to break free. As he ran through the parking lot, officers deployed a Department-issued electronic control device (TASER), which was effective and took Eaton back into custody. Once he was cleared by hospital staff, Eaton was transported to the

Polk County Jail and charged with the following:

Eaton was also charged with Possession of Firearm by Convicted Felon (F.S.S. 790.23(1)(A) – F2 and Felony Battery (F.S.S. 784.041(1) – F3  for an incident that occurred the day before (March 3, 2020) when he battered the same victim. She called law enforcement and authorities were unable to locate him, so a complaint affidavit was filed with the process of filing for a warrant was in place.

“I am so proud of the way our officers continued to search for this guy throughout the night, ultimately putting him where he belongs,” said Public Safety Director Charlie Bird. “Our victim and her children can hopefully begin picking up the pieces after such violent encounters they endured.”