On January 3, 2019 at approximately 7:55am Lake Wales Police Officers were dispatched to a traffic crash on Hwy 27 north of Central Ave. When officers arrived on scene they found the northbound lanes of Hwy 27 blocked and three vehicles were involved in the crash. Officers learned a 2014 Nissan Pathfinder was being driven southbound on Hwy 27 by Danielle Adcock, a 27 year old Winter Haven resident. For an unknown reason Adcock crossed the median into the northbound lanes and crashed into a safety wall on the edge of the roadway causing her vehicle to rotate. A 2013 Mazda hatchback was being driven northbound on Hwy 27 by Marie Hannigan, an 83 year old Babson Park resident, with Andrew Kell, a 69 year old Babson Park resident, as a passenger. Hannigan was able to stop her vehicle prior to colliding with Adcock but she was rear ended by northbound 2012 Toyota Prius being driven by Aneyra Cancel, a 24 year old Winter Haven resident. This impact and the rotation of Adcock’s vehicle caused Adcock’s vehicle and Hannigan’s vehicle to also collide.

Hwy 27 northbound was closed for approximately 1 ½ hours before a lane was opened for traffic to flow. All lanes of northbound traffic were opened at approximately 11:30am. All three vehicles were disabled and had to be towed from the scene.

This investigation is still active and no charges have been filed at this time. Anyone having information about this crash is asked to contact Officer Mary Jerome at (863) 678-4223 extension 521. 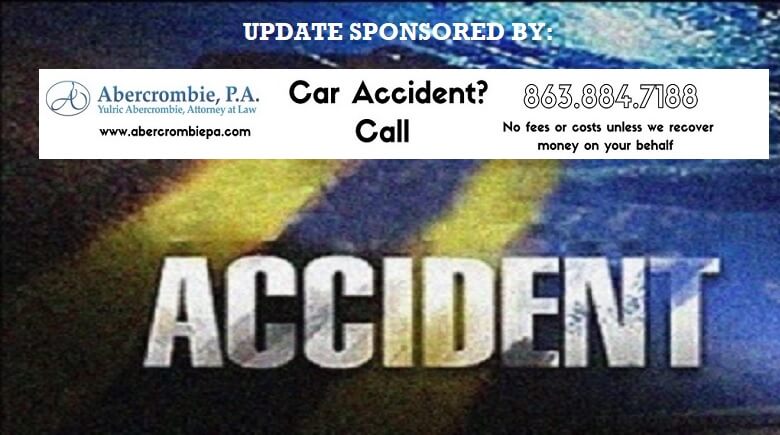