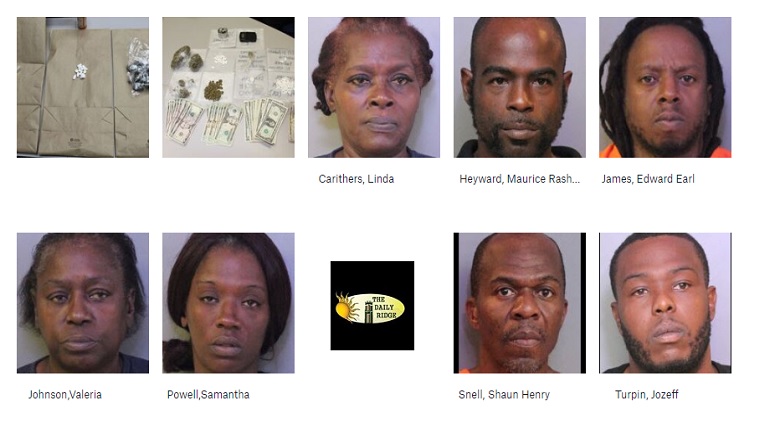 On Thursday June 15, 2017 members of the Lake Wales Police Department and the High Intensity Drug Trafficking Area (HIDTA) served two search warrants; one at 108 Dr. J A Wiltshire Avenue W and one at 107 A Street Lake Wales.

Earlier this year, members of the Lake Wales Police Department’s Crime Suppression Unit received information that alcohol and illegal drugs were being sold at 108 Dr. J A Wiltshire Avenue. They also received information that illegal drugs were being sold at 107 A Street apartment 6 which is right behind the Wiltshire address. Detectives learned Edward Earl James was residing at this apartment. Officers began noticing nightly gatherings of people at both locations and over the couple months officers were called to the area numerous times by neighbors for disturbances and loud music.

Members of the Crime Suppression Unit conducted undercover operations and discovered both residences were indeed selling narcotics. Members also discovered that the Wiltshire address had become a “party spot” where people could go purchase and consume alcohol and drugs, gamble and gather in a bar type atmosphere. This location was being operated by Shaun Henry Snell.

On the evening of June 15th officers descended on the locations and served the two search warrants simultaneously. Upon entering 108 Dr. J A Wiltshire Avenue W officers encountered several people inside, including Snell. During an initial search of the residence the following subjects were located there:

Maurice Rashun Heyward, who resides at 637 Jackson Avenue in Lake Wales, was located outside the residence inside of a fenced in area. He was found to be in possession of a small amount of marijuana. He was taken into custody and later transported to the Polk County Jail charged with possession of marijuana.

Samantha Powell, who resides at 44 W Central Avenue in Lake Wales, arrived at the residence after officers had set up crime scene tape and secured the area. After being warned not to, Powell entered the scene, crossing Police tape, yelling and stating she was there to check in her mother, Valeria Johnson. She was taken into custody and was later transported to the Polk County Jail for resisting.

Jozeff Izaih Turpin, who resides at 617 7th St N in Haines City, was located inside the residence. He was found to be on active probation for giving false information to a Law Enforcement Officer. His conditions included the fact that he was prohibited from being in a bar or around illegal drugs. He was taken into custody for violation of probation and was later transported to the Polk County Jail.

Upon searching the residence Detectives located the following narcotics: 20.1 grams of marijuana with the majority being in nineteen individual baggies ready for sale. Fourteen (14) Oxycodone pills and numerous empty baggies with marijuana remnants laying about the residence. Present also was a large amount of alcohol including liquor and beer, a variety of fruit juices for mix drinks, and small plastic serving cups. Snell was taken into custody for possession of marijuana, possession of a controlled substance, and possession of drug paraphernalia. Snell claimed that he was having a private party for a family member, who was not present.  He was later transported to the Polk County Jail.

As Detectives approached 107 A Street they observed James and two females exiting the apartment where they were detained. Upon entering and searching the apartment, Detectives located 55.1 grams of marijuana, 88 Xanax (Alprazolam) pills, 2.6 grams of powder cocaine and drug paraphernalia. James was arrested and later admitted that all of the narcotics were his. James was booked in on the charges of possession of cocaine, possession of drug paraphernalia, possession of marijuana with intent to distribute, and possession with intent to distribute alprazolam.

Linda Carithers, who lives at 325 E Central Ave in Lake Wales, was one of the females that exited the apartment with James. She was found to be in possession of a makeshift glass pipe used for smoking narcotics. The pipe contained marijuana which resulted in Carithers being arrested and later transported to the Polk County Jail charged with possession of marijuana and possession of drug paraphernalia.

Both of these residences sit directly on the East side of Laura’s Learning and Enrichment Center located at 120 Dr. J A Wiltshire Avenue which is a licensed learning center for children.

In total, over 2.74 ounces of marijuana was seized with a street value of $370.  The cocaine weighed in at 2.6 grams for a street value of $182. The street value of the Oxycodone pills was $114 and the Xanax’s pills was $880.  This adds up to an approximate total of $1,546 of street level drugs and illegally possessed prescription pills removed from the streets of Lake Wales.