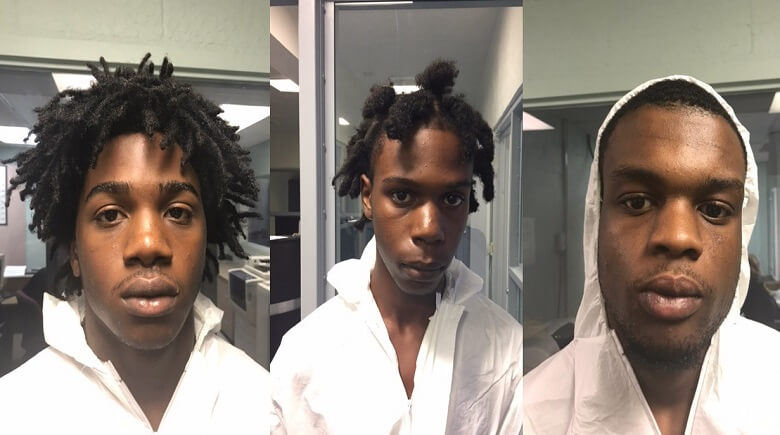 Due to the excellent coordination of the Winter Haven Police Department and the Polk County Sheriff’s Office, three Hillsborough County teens are behind bars.

The three arrested are no stranger to the law:
17 year-old Key’Vis Atkins – DOB 10/30/99, resides at 5613 Legacy Crescent Pl #202   Riverview, FL – charged with Armed burglary (F1), possession of a firearm  by a minor (M1), resisting w/o violence (M1), violation of probation ( armed robbery w/ firearm) (F3), possession of a firearm by a convicted felon (F2). Atkins is currently on probation for robbery with a firearm and has a curfew from 1900 hours to 0700 hours. Atkins was also shown to have a warrant for Absconding.
(Atkins criminal history dates back to when he was just 10 years old. Hillsborough County felony charges of: Burglary of an Unoccupied Dwelling (x2), Grand Theft (from Dwelling) (x2), Grand Theft 3rd Degree, FTA Burglary of an Unoccupied Dwelling, FTA Grand Theft 3rd Degree, Robbery with a Firearm, VOP, Burglary of an Unoccupied Dwelling (Tampa PD) and Grand Theft 3rd Degree (Tampa PD).)

18 year-old Martel Nealey 05/25/99, resides at 9515 Grovedale Cir #201  Riverview, FL – charged with Armed Burglary (F1), Resisting w/o violence (M1) and contributing to the delinquency of a minor (M1). Nealey is not on probation, but has previous charges out of Hillsborough County for carrying a concealed firearm and robbery with a firearm.

The events unfolded as follows:

On 8-10-17 at approximately 2:38 a.m., a resident in the Normandy Heights subdivision pulled into the community when he spotted three males entering a pickup truck. The resident reported seeing the interior lights on inside of the vehicle. As he approached the white pickup truck, the three males started walking away at which time police arrived.

Another officer arriving on scene spotted a black male wearing bright colored shoes coming from a driveway towards the street. The suspect ran from the area after multiple verbal commands to stop. Officers immediately formed a perimeter and the Polk County Sheriff’s Office (PCSO) air unit along with a K9 unit responded to assist.

The PCSO K9 tracked to the back of a residence at which time the pilot of the helicopter advised of three subjects jump a fence and run northbound towards Cooley Road. The pilot continued to follow two of subjects and ultimately the K-9 tracked to the Shipp Reck Mobile Home Park where officers took them into custody. One of the suspects had a gun holster inside of his waistband. The third suspect was ultimately found hiding inside of a trashcan a short distance away.

During the track while searching for the suspects, the PCSO K9 unit located two handguns that were found to be stolen out of Hillsborough County. Subsequent searches of the area found a third handgun and other items that are suspected to be connected to the trio.

“We are proud of the combined resources we have with all of our local agencies,” said Chief Charlie Bird. “We all work together with one ultimate goal in mind – to get the bad guys behind bars.”