A Winter Haven teen has been charged with Robbery with a Deadly Weapon (F-L) after he attacked a male and his pregnant girlfriend over the weekend. 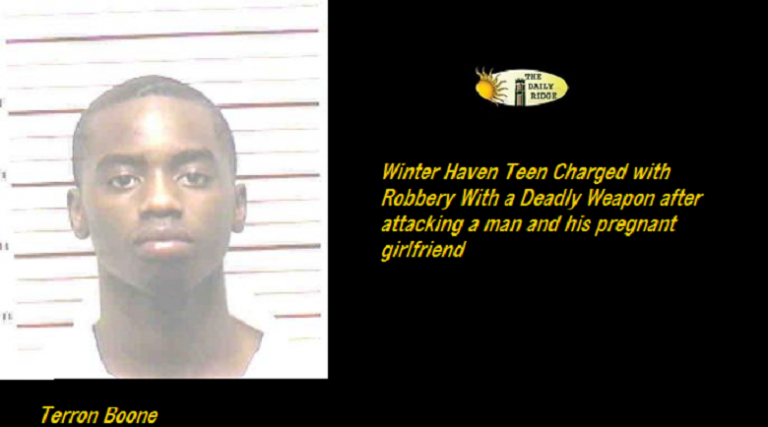 On 2-27-16 at approximately 7:45 p.m., the victims, 19 year-old Briahien Jean-Baptiste and his girlfriend, 19 year-old Myranda Shuttera drove to the Lake Maude Nature Park to meet up with some friends. As the pair arrived at the park, Jean-Baptiste started getting out of the car when he was attacked, beaten and robbed. Jean-Baptiste recognized the attacker as 17 year-old Terron Boone (DOB 6-27-98, 319 Ave P, NE, Winter Haven).

Boone punched, kicked and struck Jean- Baptiste multiple times with a blunt object. During the attack, Boone took the victim’s phone. According to the victims, Boone was accompanied by four other black males who ran out from a shadowed area and engaged in the beating as well.
Shuterra, who was still in the car when the attack began, feared her boyfriend was seriously injured and got out of the car attempting to pull the attackers off of her boyfriend. The group continued to beat Jean-Baptist with their fists and what she described as gold toned brass knuckles. During the attempts to help her boyfriend, Shuterra was thrown down to the ground and punched in the back. When she got up from the attack, she saw two black males walking towards her, one pointing a black shotgun or rifle directly at her. The two males got into the car and ransacked the inside. The group then ran from the area in a southbound direction of 7th St. N.E.
Shuterra sustained scrapes and abrasions from the attack. Jean-Baptiste sustained multiple gashes and abrasions from the attack. He was taken to the Winter Haven Hospital Emergency Room where he was treated and released.

Detectives searched for Boone, but he was not located. On 2-27-16, Boone reported to the Winter Haven Police Department where he was interviewed and arrested.  Boone, who is a student at Winter Haven High School, told detectives that he “whooped him” in retaliation of a fight that occurred another time.

When asked what he meant by “whooping him”, Boone advised that he “beat him badly.”
Boone was booked into the Polk County Jail and charged with one count of Robbery with Deadly Weapon. Throughout the interview, Boone would not divulge information on the other suspects, Detectives are asking anyone with information regarding the incident or possible identities of the other subject to call Heartland Crime Stoppers at 1-800-226-TIPS (8477). Callers can remain anonymous and could be eligible for a CASH reward of up to $3,000.